The Vanni, the area of Sri Lanka’s Northern Province south of the Jaffna peninsula, is believed to get its name as a military zone.

In 2011, the defence secretary, Gotabhaya Rajapaksa, told an international defence seminar that the Sri Lanka Army alone had “over 2,00,000” personnel, having expanded by the end of 2009 from nine divisions to 20; 44 brigades to 71; and 149 battalions to 284.1 Indeed, shortly after the end of the war in 2009 but before he fell out with the regime, the then army commander Sarath Fonseka told a tele­vision channel that the Sri Lanka Army “is going to be 3,00,000 strong very soon”. 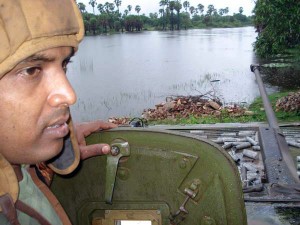 In early 2009 the strength of the navy had already reached 48,000 but it was still expanding and recruiting. At around the same time, the Sri Lankan Air Force was reported as having around 28,000 personnel but with plans to expand up to 35,000

In addition to the tri-services, Sri Lanka also raised a Civil Defence Force with nearly 42,000 personnel, many of whom were active in the war and continue to be deployed in the north. And last but not the least the country has 85,128 police personnel, it is not clear whether this number includes the 8,000 or so personnel of the Special Task Force, which in July 2010 was brought under the direct control of the ministry of defence.

So, what proportion of these forces are currently in the Northern Province, which was the main theatre of the war that ended in May 2009? It is widely known that the province now has four major security forces headquarters – in Jaffna, Kilinochchi, Mullaitivu and Vavuniya – to each of which are attached three or four army divisions and other units, a realisation of post-war military deployment plans. In fact, most of the army divisions and units that fought in the region, have now simply stayed put and made it their home, fanning out all across the north, playing “defensive” roles.

Information collated from various sources (especially the army website and media reports) indicate that the Northern Province is home to the following 15 army divisions: the 21st, 53rd, 54th, 56th, 57th, 58th, 59th, 61st, 64th, 65th, 66th and 68th divisions stationed in the Vanni and the 51st, 52nd and 55th divisions stationed on the Jaffna peninsula and islands.

In addition to these divisions there are also other army formations in the north. Of the eight or so task forces constituted during the war, at least three (2, 3, and 7) seem to be still operational and are stationed in the north. In addition, there are several other smaller army formations present in the north in the form of “independent” regimental and brigade units. Moreover, the Northern Province is also home to two large naval commands and at least two significant units/bases of the air force. 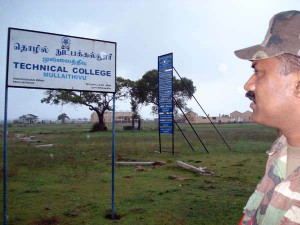 What does all this mean in terms of the number of boots on the ground? And how does this translate into force concentration with respect to area and more importantly the civilian population? To begin with, at least 15 army divisions are stationed in the Northern Province, which accounts for about 14% (8,884 sq km) of the country’s land area. Therefore, area wise, the Northern Province hosts one entire army division for approximately every 592 sq km.

This does appear to be a reasonable estimate given that the website of the Civil Military Coordination (CIMIC) of the Security Forces Head Quarters, J­affna (SFHQ-J) notes that

Over 35,000 troops are under its command and is drawn from troop levels that constitute the 51st, 52nd, 55th Divisions and several other Task Force personnel attached to this station15 (emphasis added).

Of course these figures are for the Jaffna peninsula and the islands alone. 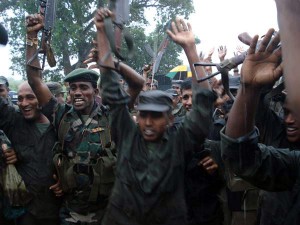 However one must add to this 1,80,000, the share of personnel from the navy, the air force, civil defence for­ces, intelligence and the police, including the special task force, etc, based in the north. Assuming that the combined presence of all these latter entities accounts for 10% of the army’s strength (18,000), again a very conservative estimate, this makes for a total of 1,98,000 security personnel in the province. This amounts to a ratio of 1 security personnel for every 5.04 civilians in the Northern Province or a force density of around 198.4 security personnel per 1,000 civilian population.