<![CDATA[The civil war in Syria, targeted shootings in Somalia and continued violence in Pakistan made 2012 a particularly dangerous year for journalists, with at least 67 killed worldwide in direct relation to their work, according to an organization that defends press freedom. The fatality numbers compiled through mid-December by the Committee to Protect Journalists represent a 42 percent increase over 2011. The committee says 2012 is on track to becoming one of the deadliest years for journalists since it began compiling records in 1992. <a href="http://www.eelamenews.com/?attachment_id=107481" rel="attachment wp-att-107481"> 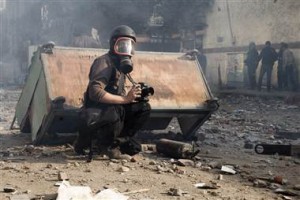 Coupled with snapshot figures showing a record-high number of journalists imprisoned worldwide – 232 on Dec. 1 – this year has been a year of living dangerously for those who work to gather and disseminate news, said Joel Simon, executive director of the Committee to Protect Journalists. “You put all that together and it’s a very bleak picture,” Simon told NBC News on Thursday. “I would say this has been one of the worst years. There’ve been years when we’ve had higher numbers of journalists killed, but the combination of near-record fatalities and record journalists imprisoned —  put those together and you have to acknowledge that this is one of the worst years on record.” Syria was by far the deadliest country for journalists in 2012. According to committee statistics, 28 journalists were killed in the fighting or targeted for murder by government or opposition forces. Among them were Marie Colvin, an award-winning American correspondent who worked for The Sunday Times of London, and French freelance photographer Remi Ochlik, both of whom were killed in a rocket attack in the Baba Amr neighborhood of the besieged city of Homs on Feb. 22. Twelve journalists died this year in Somalia, where the militant Islamist group al-Shabaab has been waging a violent insurgency against the Mogadishu-based federal government. All were murdered, according to CPJ, which says not a single killer of a journalist has been prosecuted in Somalia over the past decade. Pakistan, the deadliest country for journalists in 2010 and 2011, dropped to third this year, but the number of fatalities held steady at seven, the committee reported. In Brazil, four journalists were killed — the country’s highest annual toll in more than a decade. “In small cities, bloggers and writers for small newspapers and Web portals who are calling out corruption are being targeted,” Gabriel Elizondo, a correspondent for al-Jazeera in São Paulo, was quoted as saying by CPJ. “The profile is usually the same: It’s a small-town journalist, working for a small outlet, who gets gunned down.” The worst year on record for journalist killings was 2009, when 74 people died because of their work — nearly half of them slain in a massacre in Maguindanao province, Philippines, according to CPJ. Simon said the record-high number of imprisoned journalists as of Dec. 1 also was “extremely disturbing.” “One reason is what’s happening in Turkey. There’s a massive crackdown under way on political expression and political dissent largely focused on the Turkish minority.  Many of the journalists in jail are Kurdish,” he said. “Other places we’ve seen an increase (in detentions) are places where there have been repressive policies (against the media) for some time, like China, Eritrea, Syria, Iran,” Simon said. The imprisonment numbers, because they were tallied on Dec. 1, don’t include NBC News’ Chef Foreign Correspondent Richard Engel and members of his network production team. They were captured and held in Syria for five days before being freed after a firefight between the captors and a Syrian rebel group at a checkpoint on Monday, NBC News said. In any case, CPJ’s tally doesn’t include journalists who are abducted by “non-state actors,” Simon said. Journalists who worked online made up more than one-third of the death toll in 2012, compared with one-fifth in 2011, CPJ noted. “More independent journalists are working online closer to the action and getting killed as a result,” Simon said. “Think about how front-line news is being gathered today.  In a lot of countries around the world, dissent is limited and curtailed. There’s no opposition to express critical views in the media, so people for last decade or more have been expressing those critical ideas online.  Governments have been cracking down on this.” (NBC News)  ]]>