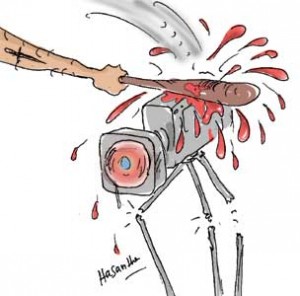 During a United Nations-led meeting in Vienna last week, the world body and its partners renewed their pledge to improve safety for journalists and prosecute those who commit acts against them through a new plan to protect media workers. The UN Plan of Action on the Safety of Journalists and the Issue of Impunity follows two days of discussions by UN agencies, independent experts, governments, media groups, and civil society organisations on the most pressing issues facing freedom of expression, during the 2nd UN Inter-Agency Meeting on the Safety of Journalists and the Issue of Impunity. More than 100 journalists have been killed so far this year, making 2012 the deadliest year for media since the UN Educational, Scientific and Cultural Organisation (UNESCO) began keeping records on the issue. The new action plan outlines more than 100 areas of work that different UN agencies and civil society groups intend to contribute to securing the safety of journalists, and will operate at the national and global level. Activities that will be implemented as a result of the plan include: helping governments develop laws on safeguarding journalists, raising awareness so that citizens understand the damage done when a journalistâ€™s rights to freedom of expression is curtailed, providing training courses for journalists in safety and safety online, establishing real-time emergency response mechanisms and strengthening the safety of journalists in conflict zones, among others. The plan also calls for enhancing protection for women journalists in response to the increasing incidence of sexual harassment and rape, decriminalising defamation offences and encouraging adequate remuneration for full-time and freelance employees.]]>