<![CDATA[Twenty-five more bodies have been found at the gas complex in Algeria where a clearing up operation continues. It is unclear if all were hostages. Earlier it was reported there were a possible further 25 burned bodies of hostages found inside the plant. <!--RTEditor:genereated-->It comes as Al-Qaeda linked commander Mokhtar Belmokhtar claimed responsibly for the deadly hostage drama at the gas plant. 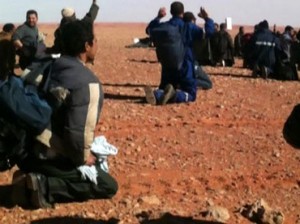 Belmokhtar expressed readiness to negotiate with both Algerian and Western states, provided they cease their bombing campaign in Mali. The news that more bodies were found at the plant came just hours after the Algerian Interior Ministry warned that the death toll of foreign and Algerian workers taken hostage during the siege may increase. On Saturday night, following Algerian forces’ deadly ‘final assault,’ the number killed was put at 23 hostages and 32 captors. In total, special forces freed “685 Algerian workers and 107 foreigners,” the Interior Ministry said. So far, Algerian authorities have not announced the nationalities of any of the 23 dead hostages. British, US, Norwegian and Japanese nationals have been reported missing. Though the hostage crisis in eastern Algeria has ended, the scene at the plant remains chaotic as rescuers struggle to find those reported missing. For now, the fates of nearly 30 people from the UK, the US, Norway Japan and Malaysia remain unclear. The UK Prime Minister confirmed Sunday that three British hostages had been killed, and that another three British nationals are also “believed dead.” The UK Foreign Office has confirmed that some UK residents returned home overnight. Shortly after Cameron’s statement, Foreign Secretary William Hague confirmed that 22 British citizens who survived that hostage drama had flown home on charter flights organized by the government or by oil company BP. A Japanese engineering firm said Sunday that of the 17 Japanese nationals working at the plant, 10 are still missing and seven have been confirmed as safe. “As such, we are taking the government announcement that there were multiple Japanese killed extremely seriously,” a JGC Corp. spokesperson said. The engineering firm was involved in gas production in the region. The Malaysian foreign ministry said that at least two of its nationals remain unaccounted for, and there was a “worrying possibility” that one of them was dead. The other three Malaysians who had been working at the plant had been confirmed safe. The whereabouts of five Norwegians is also unclear; several reports said that they may have been killed during the hostage crisis at the plant. The attackers’ ranks reportedly spanned six nationalities, including Arabs, Africans and other non-African nations. Of the 32 militants killed, only three were Algerian. It was reported Saturday that one of the group’s leaders, a veteran fighter from Niger called Abdul Rahman al-Nigeri, headed a group of militants who were killed during the final assault. The other group’s leader, Abu al-Bara’a al-Jaza’iri, was reportedly killed earlier by the Algerian army at the gas field’s residential complex. Reports also suggested that the head commander of the kidnappers, Mokhtar Belmokhtar, who is linked to a regional Al-Qaeda group, was not at the plant during the militants’ assault. Malian militants seized the In Amenas natural gas installation in the Algerian Sahara on Wednesday, taking hundreds of hostages, including many foreigners. The militant group said it conducted the raid in retaliation for France’s engagement in the Mali crisis. The militants also demanded the release of two terrorists held in the US in return for the hostages. One of the terrorists, Omar Abdel-Rahman, known as ‘The Blind Sheikh,’ played a role in the planning of the 9/11 attacks in 1993. A number of countries, including the UK and Japan, initially expressed their dissatisfaction over Algerian authorities’ response to the hostage situation because the rescue operation was ordered without consultation. Prime Minister Cameron and French President Francois Hollande later praised Algeria for taking appropriate action in what they called an “extremely difficult” situation. US President Barack Obama and his French counterpart Francois Hollande said that responsibility for the hostage deaths lay with the “terrorists”. “The blame for this tragedy rests with the terrorists who carried it out, and the United States condemns their actions in the strongest possible terms,” Obama said after at least one American had been confirmed dead. ­

­As the siege of the isolated Algerian plant is over, survivors of what was one of the largest hostage crises in recent memory recall the horror of their ordeal. Some freed workers have described being forced to wear explosive jackets and being threatened with being blown up, others described watching the summary execution of hostages by their captors. At a press conference on Sunday, some of the freed workers from the 72-hour stand-off gave an account of how nine Japanese hostages were murdered. Witnesses said the first three were killed as they tried to escape from a bus taking them to the airport. “We were all afraid when we heard bursts of gunfire at 5:30 am (04:30 GMT) on Wednesday, after we realized that they had just killed our Japanese colleagues who tried to flee from the bus,” AFP quoted Riad, who works for Japan’s JGC Corp engineering firm. Earlier there were reports suggesting that one Briton and one Algerian were killed on a bus in the very initial assault by the militants. The gunmen then took the other bus passengers to the residential compound, where they collected hundreds of hostages, one witness explained. “A terrorist shouted ‘open the door!’ with a strong north American accent, and opened fire. Two other Japanese died then and we found four other Japanese bodiesin the compound”, he added, choking with emotion. At the same time the Algerian workers were held separately from foreigners. According to witness recounts they were treated well as the militants were not interested in killing non Christians. Eventually they were allowed to leave. “I was allowed to go, but before I did, I saw many Brits killed,” one unnamed man was quoted by media. “One Westerner trying to give first aid was blown up by the terrorists.” An unnamed witness, who said he worked as an engineer, told the French press that militants were shouting: “We’re only looking for foreigners, you Algerians can go!” Some workers managed to flee the gas complex by cutting a hole through the metal fence, according to accounts in the media. There have been some reports that a 57-year-old Norwegian was among those who escaped through the fence. He told the press that exhausted and severely dehydrated, he along with other people had to walk for 15 hours through the desert before reaching the nearest town of In Amenas. In another account reported in the media, an Algerian driver named only as Brahim said he was lucky to escape through the fence surrounding the complex with about 50 people including three foreigners. “As bullets rang nonstop, we cut holes in the metal fence with large clippers, and once through, we all started running,” he said. “We were quickly taken in by the special forces stationed just a dozen meters from the base. I didn’t look back.” (RT News)]]>