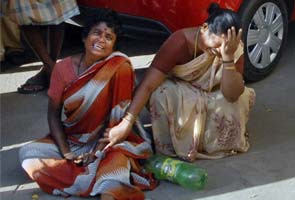 A massive blaze at a fireworks factory in the southern Indian state of Tamil Nadu has left at least 37 dead, reports say. The victims were factory workers and villagers who were at the scene after the fire started. The blaze took place in the town of Sivakasi, which produces 90% of India’s fireworks. The fire at the Om Shakti factory triggered off several explosions of firecrackers, injuring around 80, ‘the ‘Hindu reports. It took fire fighters about five hours to bring the fire under control, the BBC’s Sanjoy Majumder in Delhi says. More than 250 workers were said to be inside at the time of the incident. Najmul Hoda, superintendent of police for Virudhunagar district where Sivakasi town is located has told BBC that the factory’s licence had been suspended on Tuesday for violating safety rules and that police were trying to trace the factory owner. The local government has announced compensation for the victims and an investigation has been ordered.]]>