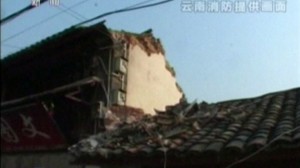 Earlier, Xinhua news agency reported that the quake destroyed about 700 homes and damaged over 2,500 buildings.

An earthquake measuring 5.5 on the Richter scale was recorded on Sunday afternoon in Eryuan county of Yunnan province, near Chinaâ€™s border with Myanmar.

The epicenter was at a depth of 9 kilometers, local seismologists said. The quake struck 51 kilometers from the city of Dali, and was registered as deep as 33 kilometers below the surface of the planet, according to the US Geological Survey (USGS).

Thirty people have been injured, and three of the injured sustained serious wounds, Xinhua reported. According to RIA Novosti news agency one person is in a serious condition. There were no reports of fatalities. An estimated 130,000 people inhabit the area. Some 55,000 people were affected by the quake, according to the Yunnan Provincial Civil Affairs Department.

A humanitarian relief operation is being carried out in the region; provincial authorities have sent 6,000 tents, blankets and sets of clothes for disaster relief.