<![CDATA[A 7.7-magnitude earthquake, followed by two aftershocks, has struck the western coast of Alaska. The magnitude was later downgraded to 7.5. The regional tsunami warning has been lifted. <script type="text/javascript">Craig, Alaska, is the city nearest to the epicenter of the quake, the US Geological Survey reported. 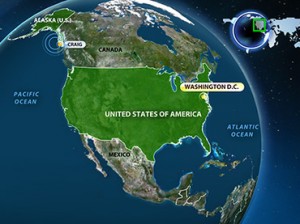 The tremor occurred at a depth of 6 miles (9.6 kilometers) at 8:58am GMT, and was followed by two aftershocks measuring 4.7 and 4.5, respectively. Port Alexander, Alaska, has seen a 6-inch (15.2-cm) rise in sea level, while the Alaska Tsunami Warning Center has predicted significant widespread inundation of land. Local residents wrote on Twitter that they have received alerts to evacuate the beaches. No casualties or damages have been reported. The regional tsunami warning for parts of the Alaskan coast near the quake’s epicenter has been lifted. (RT News) ]]>