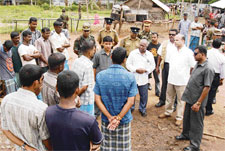 The Tamil National Alliance (TNA) yesterday reiterated the call for the early release of 810 political prisoners in the country. “It has been more than three years since the war ended and there are still 810 political prisoners in several jails around the country. There have been promises that the cases against them would be expedited, but this has not happened,” the MP, speaking during the votes of the Ministry of Prisons and Prison Reforms, said. He also said most of those in prison were involved in minor offences and should be released as they pose no threat to society. “We have a minister here who was a member of the LTTE, a Chief Minister who was also an active LTTE member and now KP is living freely in Kilinochchi. So, why can’t these people, who were arrested for minor offences like giving water or food to the LTTE cadres, be released?” he questioned. He alleged the prisoners are routinely strip-searched before they are taken to Courts for hearings and on their return stripped naked once again and searched, and that the prisoners are treated in a humiliating manner.]]>