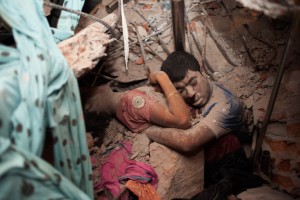 Many powerful photographs have been made in the aftermath of the devastating collapse of a garment factory on the outskirts of Dhaka, Bangladesh. But one photo, by Bangladeshi photographer Taslima Akhter, has emerged as the most heart wrenching, capturing an entire countryâ€™s grief in a single image.

Shahidul Alam, Bangladeshi photographer, writer and founder of Pathshala, the South Asian Institute of Photography, said of the photo: â€œThis image, while deeply disturbing, is also hauntingly beautiful. An embrace in death, its tenderness rises above the rubble to touch us where we are most vulnerable. By making it personal, it refuses to let go. This is a photograph that will torment us in our dreams. Quietly it tells us. Never again.â€

Akhter writes for LightBox about the photograph, which appears in this weekâ€™s TIME International alongside an essay by David Von Drehle.

I have been asked many questions about the photograph of the couple embracing in the aftermath of the collapse. I have tried desperately, but have yet to find any clues about them. I donâ€™t know who they are or what their relationship is with each other.

I spent the entire day the building collapsed on the scene, watching as injured garment workers were being rescued from the rubble. I remember the frightened eyes of relatives â€” I was exhausted both mentally and physically. Around 2 a.m., I found a couple embracing each other in the rubble. The lower parts of their bodies were buried under the concrete. The blood from the eyes of the man ran like a tear. When I saw the couple, I couldnâ€™t believe it. I felt like I knew them â€” they felt very close to me. I looked at who they were in their last moments as they stood together and tried to save each other â€” to save their beloved lives.

Every time I look back to this photo, I feel uncomfortable â€” it haunts me. Itâ€™s as if they are saying to me, we are not a number â€” not only cheap labor and cheap lives. We are human beings like you. Our life is precious like yours, and our dreams are precious too.

They are witnesses in this cruel history of workers being killed. The death toll is now more than 750. What a harsh situation we are in, where human beings are treated only as numbers.

This photo is haunting me all the time. If the people responsible donâ€™t receive the highest level of punishment, we will see this type of tragedy again. There will be no relief from these horrific feelings. Iâ€™ve felt a tremendous pressure and pain over the past two weeks surrounded by dead bodies. As a witness to this cruelty, I feel the urge to share this pain with everyone. Thatâ€™s why I want this photo to be seen.