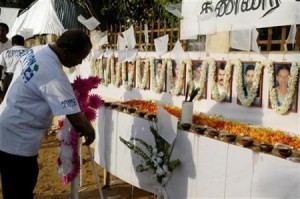 Action Against Hunger, also known as ACF, launched a campaign of advocacy and mobilization to demand justice for 17 ACF aid workers who were executed in the town of Muttur in August 2006.

The campaign is anchored in a signature video and petition that request an independent United Nations investigation to shed light on the circumstances of the murders and hold those responsible for the massacre accountable.

â€œOur colleagues were taking shelter in ACFâ€™s offices in Muttur on August 4, 2006, as fighting between government and rebel forces engulfed the town. In one of the most heinous crimes ever committed against humanitarian workers, our 17 colleagues were lined up, forced to their knees and each shot in the head. None of the three national investigations undertaken in Sri Lanka has resulted in substantive answers; worse, evidence has been deliberately concealed and local authorities have obstructed justice,â€ ACF said.

The UN Human Rights Council is scheduled to discuss Sri Lankaâ€™s human rights record on November 1st in Geneva and ACF feels opportunity should be used to ensure the crimes donâ€™t go unsolved and unpunished.