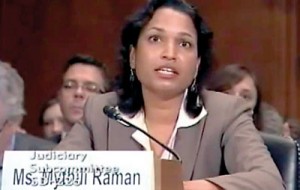 The United Statesâ€™ newly appointed Acting Assistant Attorney General has her roots in Northern Sri Lanka. Mythili Raman is the daughter of A. Tharmaratnam, who served the International Financial Corporation of the World Bank, and granddaughter of C Loganathan, a former general manager of the Bank of Ceylon. Her parents are from Vadaramarachchi, Jaffna.

Ms. Raman, the newly appointed Acting Assistant Attorney General for the Criminal Division of the U.S. Justice Department and successor to Mr. Lanny Breuer, is widely acclaimed in legal circles as a trailblazer in the Justice Department. Ms. Raman had her undergraduate degree from Yale, and obtained a law degree from the University of Chicago.

As head of the Criminal Division, Ms. Raman oversees nearly 600 attorneys who prosecute federal criminal cases across the country and help develop criminal law. She also works closely with 93 United States Attorneys in connection with the investigation and prosecution of criminal matters in their districts. Ms. Raman has been serving in the Criminal Division since August 2008, first as Acting Chief of Staff and, from September 2, 2009 to March 1, 2013, as Principal Deputy Assistant Attorney General and Chief of Staff.