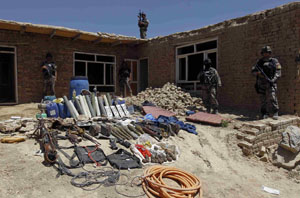 Thursday, with authorities saying they had thwarted a mass attack and captured intelligence pointing to the militant Haqqani network.

Â Soldiers from Afghanistan’s spy agency, the National Directorate of Security (NDS), launched the raid just after midnight, entering a single-story house compound on the fringes of Kabul which the insurgents were using as a base.

Â â€œThey planned mass attacks in different parts of Kabul disguised in burqas,â€ the NDS said in a statement, referring to the head-to-toe covering worn by many Afghan women and sometimes used by insurgents to evade detection.

Â Police said two insurgents escaped during a gun battle that raged for five hours around the isolated compound, where the insurgents had been amassing weapons in a newly built brick house.

Â The militants had three vehicles loaded with explosives and suicide-bomb vests, as well as large stores of rocket-propelled grenades and automatic weapons, and planned to occupy a high-rise building to attack the city’s business heart.

Â The Taliban issued a statement denying that Thursday’s operation had targeted their fighters, although the insurgents often play down their defeats and inflate successes.

Â The NDS said target maps and telephone numbers recovered from the compound had numbers for the Haqqani network based outside Afghanistan.

Â Haqqani network militants, allied with the Taliban and largely based in northwest Pakistan’s lawless border lands, have been blamed by NATO-led forces in Afghanistan for several high profile attacks in recent months.

Â Dozens of militants launched a coordinated assault in central Kabul on Apr.15, occupying a high-rise construction site and pounding the city’s diplomatic and government centre with rocket-propelled grenades and small-arms fire in an attack that took 18 hours to quell.

Â On Jun.22, Afghan security forces backed by foreign advisers fought a day-long battle with insurgents after a Taliban attack on a lakeside hotel on Kabul’s outskirts.

Â But security forces and NATO-led foreign troops say the sporadic attacks do not point to weaknesses in Afghan forces and intelligence ahead of a withdrawal by most foreign combat troops to be completed by 2014.

Â The United States is pressing Pakistan to step up its efforts to root out militants, in particular the Haqqanis.

Â Pakistan has strong traditional links with the Afghan Taliban and other militant groups but it denies accusations it uses them as proxies to gain leverage in Afghanistan ahead of any settlement to the war, or in case a civil war breaks out after foreign troops leave.

Â Pakistan has also long complained that the United States has overlooked its contribution to the fight against militants.

Â NATO’s top commander in Afghanistan, U.S. General John Allen, met Pakistani counterparts in Islamabad on Thursday to discuss cross border security in the wake of hundreds of rocket attacks in eastern Afghanistan which Afghan officials have blamed on the Pakistan army.

Â Pakistan has denied the accusation.

Â â€œWe are making significant progress toward building a partnership that is enduring, strategic, carefully defined, and that enhances the security and prosperity of the region,â€ Allen said in a statement after his talks.

Â The NATO-led force in Afghanistan has acknowledged an 11% spike in attacks over the past three months since the start of the summer fighting period, although overall the number of foreign soldiers killed is down on last year. Eighty-five were killed in June and July against 119 over the same period last year. (Reuters).