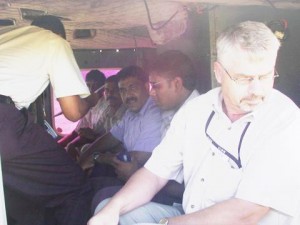 Norway’s coup in bringing Colombia and Marxist rebels to the negotiating table may be its swansong after decades as the midwife of diplomatic breakthroughs like the 1993 Oslo talks between Israel and the Palestinians, Reuters reports.

Small states are losing their mediating clout as the world grows increasingly multipolar and regional powerhouses assert their authority beyond their borders, experts say.

The shifting power balance is crowding out smaller players from big diplomatic processes, leaving foreign aid as the key alternative foreign policy tool for rich but small countries like Norway.

“I think ‘Norway the peacemaker’ is a convenient myth today … these are bygone days” said Janne Haaland-Matlary, a former Norwegian deputy foreign minister.

Norway, home to the Nobel Peace Prize, gained a key diplomatic role at the end of the Cold War when it moved into the power vacuum left by the collapse of East-West rivalries for global influence.

Home to just 5 million people on Europe’s edge, Norway took a leading role in the first face-to-face meeting between Israel and Palestine that led to a 1993 deal, and was a key player in the 1996 agreement that ended Guatemala’s 36-year civil war.

Its efforts to end Sri Lanka’s civil war, conflict in the Philippines and work with Cuba were less successful but the involvement gave Norway access to the higher echelons of diplomacy as the world’s biggest powers took notice.

“Sri Lanka made London interested, Cuba made the U.S. interested,” said Haaland-Matlary, who is also a professor at the University of Oslo.

The Colombian involvement, begun close to two decades ago when Norwegian diplomats worked in Guatemala, may be the last of these major diplomatic efforts.

With Venezuela and Cuba both taking part, the United States has a keen interest. But a direct role could be detrimental so Norway, a NATO member and staunch U.S. ally, is a perfect “front”.

“Given Norway’s especially good relationship with the U.S., I wouldn’t be surprised if the U.S., which has a substantive interest in Colombian process, may find it opportune to encourage Norway (as) an apparently neutral front stage facilitator,” said Tone Bleie, director of the Center For Peace Studies in Tromsoe in Arctic Norway.

Colombia and FARC guerrillas began their talks behind closed doors in Oslo on Wednesday and plan to eventually move their discussions to Havana.

“The strength of Norway is that it can afford to be patient, quiet and systematic, and parties tend to appreciate that,” said Jan Egeland, a former U.N. deputy secretary-general and a party to Colombia’s last peace effort more than a decade ago.

“They also appreciate that Norway is small so it will facilitate and can’t force anything down their throat.”

Norwegian officials shun the prestige of bringing the Colombian talks to Oslo and declined repeated requests for comment.

“But this game is changing in an increasingly multipolar world,” Bleie said.

So smaller countries, like Norway, Sweden, Switzerland and the Netherlands, all keen players in peace processes, have a smaller pie to share in the quest for international influence.

That leaves international aid as Plan B.

Sweden, Norway and the Netherlands are the biggest foreign aid donors relative to their economic output, according to the Organisation of Economic Co-operation and Development.

In recent years it has pledged $1 billion to Brazil and Indonesia for rain forest preservation and gives Afghanistan $135 million a year, mostly for economic development. It distributes money all over Africa and gave Tanzania, an emerging oil and gas player, more than $100 million last year.