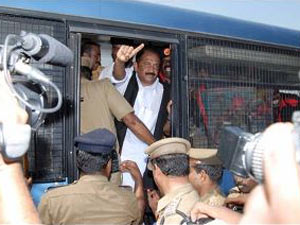 He was arrested when he and hundreds of his supporters tried to move further from Gadchicholi to Sanchi to protest the Sri Lankan President’s visit, PTI reports.

Earlier, despite heavy security, a group of MDMK supporters sneaked into the state capital through rail and air routes to protest Rajapaksa, who is arriving in Bhopal today (Sept. 21), police said.

The protesters raised slogans against Rajapaksa demanding that he should go back from India immediately.

MDMK has been against his visit as they hold him responsible for the alleged atrocities on Tamils in Sri Lanka.