<![CDATA[Greetings, While protests were erupting in major cities and towns of Tamilnadu expressing solidarity with the 30,000 peaceful protestors assembled in the beaches of Koodankulam facing the brunt of violence by the state arm, a responsible human rights defender should stand up against the use of any force by the state. <a href="http://www.eelamenews.com/?attachment_id=102891" rel="attachment wp-att-102891"> 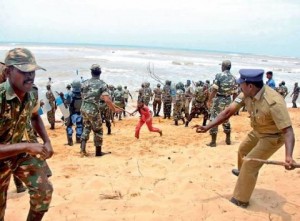 Instead it was shocking to watch the Amnesty International India chapter issuing a statement which was close to a policy advice to the police force, asking them “not to use excessive force” and “stick to international standards”. More to it, the statement issued by the Amnesty International India chapter, had mentioned incorrectly that the struggle had “first began in March this year” while the whole world is following the struggle for more than a year (nearly 400 days). Adding insult to injury, the statement of the India chapter, did not shy off to tarnish the protestors, who have shown such restraint against all measures of instigation by the police for the past one year, to have “thrown sand and stones at the police”. It is disheartening to watch the human rights “watch dog” Amnesty International India chapter turning out to be a pet dog of the state and advocate, “the police may resort to force if other means are ineffective”. The International body and the India chapter should review its paradigm of approaching the state and the people in equal terms, especially in the South Asian context, which carries on the legacy of a repressive colonial state in every aspect of its functioning. Such a milieu demands that human rights perspective should be formulated not from a state – centric approach, but from a serious consideration of the interests of the struggling people. We express our anguish on this unhealthy attitude of a responsible human rights watch dog advocating state policy and “measured violence”. We request all to demand the International body to inquire into the blunder committed by its Indian chapter. We request responsible citizens and human rights activists to review their “balancing” act of equally condemning the state and the people, and urge them to take a people centric perspective. Sincerely Yo. Thiruvalluvar, Valarmathi. [Your name]]]>