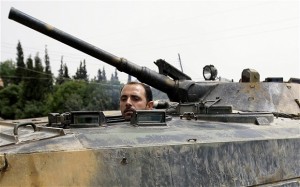 France has taken the responsibility for supplying Syrian rebels with money and artillery on behalf of the US, which is not interested in soiling their hands before Novembers presidential elections, professor Engdahl told RT. ­The aid reportedly started flowing last Friday, to five local authorities in the so called “liberated zones” located in three provinces – Deir al-Zor, Aleppo and Idlib- according to a diplomatic sources cited by Reuters. These actions will not lead the country out of the conflict, but rather drag it into far more bloodshed, says geopolitical researcher researcher and author of Full Spectrum Dominance, F. William Engdahl. RT: Why is France getting so involved in Syria – what’s Paris seeking to gain by supporting the rebels? William Engdahl: I think France is being a very dishonest peace broker in this whole process.  And I think they are acting as a cat’s paw, if you will, for the US State Department and Pentagon until after the US elections. Obama does not want to get involved in what will be an extremely messy conflict directly in Syria until after the US voter is over.  I think France is playing this hitman role and the idea of giving heavy artillery to these so called buffer zones is the most cynical thing imaginable. It is going to create civil war; it is going to create bloodshed – anything, but peace. So, this is just one of the most dangerous moves of the whole Syria engagement by NATO in the last 18 months. RT: Will direct French assistance be enough to tip the scales of the Syrian conflict? WE: Well, I think if you look at what the Muslim Brotherhood is being reported doing since they took the presidency in Egypt, you will see that the Syria opposition is dominated by the Muslim Brotherhood, the same organization, and their long-term agenda is introducing an al-Qaeda or Taliban like fanatical Islamic Sharia law in Syria and ending the tolerance of different religions which has been the trademark of Syrian life for decades under the Assad family. In general there are reports from journalists inside Syria over the last few months of the so-called opposition, in many cases they are al-Qaeda or Mujahidin that have been boarding from Saudi Arabia or elsewhere proving weapons, that they have beheaded civilians and blamed the atrocity on the Assad government. I don’t know what you could call the equivalent of the recognition of a government in an exile or building government in exile. Perhaps if the Russian government were to recognize the Ku Klux Klan as a government in an exile and provide it heavy artillery so that they could go against Washington or something like that. It is just absurd. RT: If France is leading, championing the lead into Syria, what are they gaining? WE: That’s a good question. Historically France’s elite, going back to the Napoleonic era if you want, has always tended geopolitically to punch above their weight. And I think since Sarkozy and the French military backed Sarkozy the way to get France back in the NATO game as a player that they have tended every single time on major international decisions to punch above their weight with catastrophic consequences for France. With the syrian adventure Hollande- Fabius [French Foreign Minister Laurent Fabius]  and the government is engaged in, is going to back fire in the face of France and certainly of the world if it comes to World War III by miscalculation. This is the most dangerous thing I have seen in 37 years of analyzing geopolitical developments. (RT News).]]>