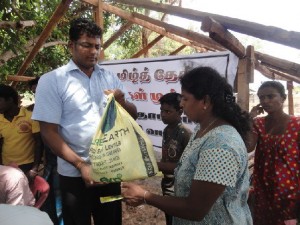 The military prevented the distributions of the assistance taken for the war displaced that were evacuated from the closed down Menik Farm and re-settled in the midst of a jungle, says the Tamil National Peopleâ€™s Front.

On the 30th, the people who had come to receive the assistance taken under the leadership of the partyâ€™s Secretary, to the Seeniyamottai jungle, was turned back by the army, said the leader of the Tamil National Peopleâ€™s Front, Mr. Gajendra Kumar Ponnambalam, told BBC Sandesaya programme.

110 destitute families evacuated from the Menik farm were taken to the Kepapulavu village in Mulaitivu district and settled in the Seeniyamottai jungle.

He said that they have taken assistance for 346 persons. They had informed the District secretariat and the displaced. However the military had announced to the people who had assembled alongside on the road, that relief will not be distributed and to go back to the Seeniyammottai camp.

Mr. Gajendra Kumar said they had not informed the army that they were taking relief, as there was no necessity to inform the military of matters pertaining to civil affairs.