A suicide bomber killed at least 22 people outside a police academy in the Yemeni capital Sanaa on Wednesday, dramatically exposing the government’s vulnerability to al Qaeda-linked insurgents despite a U.S.-backed offensive against them. 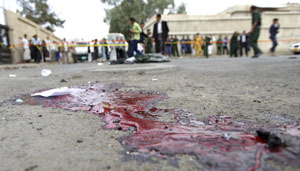 Policeman Fadel Ali told Reuters police cadets were leaving the academy when the bomber attacked: â€œWe ran to the place and found dozens of cadets covered in blood. Blood was everywhere.â€ Parts of the cadets’ khaki uniforms were scattered across the dirt outside the academy, and blood spattered the walls.

Unusually, the suicide bomber did not die immediately but was evacuated to hospital by medical staff. He was missing a leg and an arm. A Yemeni security official, who declined to be named, said the bomber told security officers before he died that he was affiliated with al Qaeda and came from Amran, a town 70 km (43 miles) north of Sanaa.

Al Qaeda in the Arabian Peninsula (AQAP) claimed the attack, just as it did a similar attack in Sanaa in May, when a suicide bomber in army uniform killed more than 90 people rehearsing for a military parade. The violence in the heart of the capital demonstrated how far the government is from defeating the insurgents despite a U.S.-backed offensive that drove them out of their southern strongholds this year.

IN RETREAT, NOT DEFEATED â€œThe bombing shows that the security services are still weak and that al Qaeda has not been defeated but simply retreated, maintaining its ability to strike wherever it wants,â€ said Saeed Obeid, an expert on al Qaeda. The United States has been pouring financial and military aid into Yemen to stem the threat of international terrorism from AQAP and prevent any spillover of violence into neighbouring Saudi Arabia, the world’s biggest oil producer.

It has also stepped up a campaign of drone missile strikes against AQAP, which has been behind several failed attacks on the United States, including an attempt to blow up an airliner over Detroit on Christmas Day in 2009. The Yemeni government vowed to keep up the fight. â€œYemen will counter the evil of terrorism with honour and bravery.

Al Qaeda today is not only facing the military and security services but also the fury of the Yemeni public,â€ Adel al-Suneini, charge d’affaires in Washington, said in a statement sent to Reuters.Â  But analysts say Yemen faces an uphill battle to defeat the insurgents, who have vowed to carry their fight across Yemen.

â€œThe government campaign against al Qaeda is going to be a long process and … victory is still far away,â€ said Theodore Karasik, the director of research and development at the Dubai-based Institute for Near East and Gulf Military Analysis. TOLERATED UNDER SALEH The insurgents had been emboldened by a decline in government control over Yemen last year, during protests that eventually ousted long-time president Ali Abdullah Saleh, and seized several southern cities before being driven out this year.

U.S. officials say that President Abd-Rabbu Mansour Hadi – who came to power in February as part of a power-transfer deal brokered by the United States and Gulf states – is more cooperative in the fight against al Qaeda than his predecessor.

But that has also made his government, and state installations like the police academy, more vulnerable. â€œAl Qaeda had a kind of dÃ¬tente with the Saleh regime which gave it a safe haven in return for not attacking government and local targets.

This is over now, hence the attacks,â€ said Yemeni political analyst Abdul-Ghani al-Iryani, echoing a widespread view that Saleh turned a blind eye to AQAP to convince Washington to keep providing aid. Karasik said that AQAP appeared to be adopting methods used in Iraq against the government in Sanaa. â€œIt’s the same kind of tactics that we see al Qaeda using in Iraq, targeting police academies and the military. There is a migration of tactics from Al Qaeda in Iraq to Al Qaeda in the Arabian Peninsula.â€

The U.S. involvement in Yemen, particularly the increasing use of its secretive drone missile strike programme, has stirred controversy both there and in the United States. Some argue that the drone strikes drive fresh recruits to al Qaeda by causing civilian casualties; others that Yemen actually welcomes them, though officials deny their use because it infringes Yemen’s sovereignty.(Reuters)