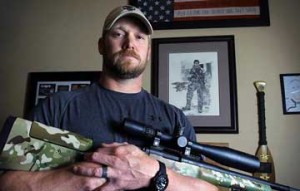 A former Navy Seal who survived bloody gun battles in war torn Iraq and became the deadliest sniper in American military history has been shot and killed at a hunting resort in Texas. Chris Kyle was credited with killing more than 150 enemy combatants during four tours of duty, a record that earned him a legendary status among his fellow Seals and made him a prominent target for Iraqi insurgents who were said to know him as â€˜The Devil of Ramadiâ€™ and placed a $20,000 bounty on his head.

He was shot and killed on Saturday afternoon at a shooting range south west of Fort Worth along with Chad Littlefield, 35, a neighbour and friend.

Witnesses suggested that the men were attempting to help a military veteran, Eddie Routh, who was suffering from post-traumatic stress syndrome. Reportedly a former marine, the 25-year-old has been charged with two counts of murder. Police said Routh had opened fire on the two men, fled in a Ford pickup truck and was arrested near his home just after four hours later, after a brief pursuit.

The death of Americaâ€™s most lethal sniper in a peaceful part of Texas came in the midst of a bitter argument over gun control. Kyle himself had weighed in recently, accusing President Barack Obama of being â€œagainst the Second Amendment.â€

â€œChris and Chad were gym buddies,â€ said Travis Cox, another former sniper who is executive director of Fitco Cares, the veteranâ€™s foundation that Kyle helped to establish after leaving the military. He told The Times: â€œThere is no way to wrap your head around what happened, that they died trying to help a veteran in need.â€

Asked why they might have taken a veteran to a shooting range, he said: â€œA lot of veterans enjoy the outdoors and … if you share a common interest, itâ€™s a platform to help. It wasnâ€™t connected with the foundation, this was just the type of men they were.â€

Kyleâ€™s feats with a .300 Winchester Magnum had long been legendary in military circles. He had killed two combatants riding away on a motor scooter with a single bullet and killed another who aimed a rocket launcher at an army convoy from a range of 1.2 miles. â€œGod blew that bullet and hit him,â€ he said last year, after he became known to a wider audience through a bestselling memoir American Sniper.

â€œIf you were going to write a fictional character you couldnâ€™t really create one like Chris because people would say itâ€™s too good to believe,â€ said Jim DeFelice, a co-author of that memoir. â€œHe struggled most with how to put God, country and family in order, but he never put himself first,â€ he said. â€œWhen the book came out he got a lot of attention, but he remained a good old Texas boy.â€ ( Courtesy TIMES)