Kofi Annan has admitted that the international community’s efforts to find a political solution to the escalating violence in Syria have failed.

In an interview with Le Monde, Annan, the special envoy for the United Nations and the Arab League, said divisions between regional and world powers over how to resolve the conflict, which has claimed the lives of more than 15,000 Syrians, were making the situation worse.

“The evidence shows that we have not succeeded,” he said. 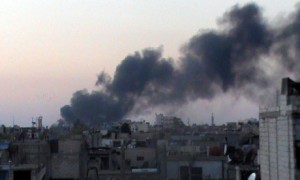 His comments came as the conflict spilled over the border into Lebanon on Saturday when mortar fire from the president Bashar al-Assad’s forces hit villages in the north of the neighbouring country, killing five people.

Annan’s six-point plan was to begin with a ceasefire in mid-April between government and rebel forces but the truce never took hold. Three hundred UN observers sent to monitor the ceasefire are confined to their hotels because of the escalating violence.

Annan offered few suggestions on how the peace plan could be salvaged. In an earlier interview with the Guardian he suggested that Iran had a role to play in resolving the crisis â€“ a position vigorously opposed by the west because Tehran is a key supporter of Assad.

He added that criticism of the world powers’ failure to agree on a political solution had too often focused on Russia, which supports Assad’s rule.

However, the envoy added that countries supplying weapons to both sides in the conflict were making the situation worse. “Very few things are said about other countries that send arms and money and weigh on the situation on the ground,” he said, without naming any specific countries.

Russia provides the Syrian government with most of its weapons. Saudi Arabia and Qatar are arming and financing the Free Syrian Army. The US says it is providing communications and “non-lethal” aid but, like Turkey, is thought to be helping co-ordinate weapons deliveries.

Annan told the Guardian he did not intend to resign in the face of criticism that his consensus-building diplomacy was getting nowhere as Syria bleeds.

But there is no end in sight to the international divisions over the future of the Assad regime.

On Friday the US secretary of state, Hillary Clinton, used a conference of the Friends of Syria group in Paris to demand that Russia and China join the three western members of the UN security council to put pressure on Assad over an escalating conflict.

But a Chinese foreign ministry spokesman, Liu Weimin, said in a statement on Saturday that Clinton’s remarks were “totally unacceptable”, claiming that Beijing had contributed greatly to the cause of Syrian peace.

Last weekend in Geneva Russia and China refused to back a call that implied that Assad must step down as a prelude to a “Syrian-led political transition”.

Opposition activists said more than 67 people were killed across Syria on Friday. The Syrian army took control of the rebel stronghold of Khan Sheikhoun in Idlib province. Fighting was reported in the Kafr Souseh area of Damascus, where many government offices are located.

The escalating conflict has raised fears the fighting will spill over into Lebanon, which has extensive sectarian and political ties to its eastern neighbour.

Syrian rebels have used north Lebanon as a base and Assad’s forces have bombed villages and even pursued insurgents over the border.

Residents of Lebanon’s Wadi Khaled region said several mortar bombs hit farm buildings three to 12 miles from the border at around 2am on Saturday. At midday villagers reported more explosions and said they heard gunfire close to the border.

In the village of al-Mahatta, a house was destroyed, killing a 16-year-old girl and wounding a two-year old and a four-year old, family members told Reuters. A 25-year-old woman and a man were killed in nearby villages, residents said.

Two Bedouins were killed in the border village of Hishe when two rocket-propelled grenades fired from within Syria hit their tent, according to local residents. (The Guardian).