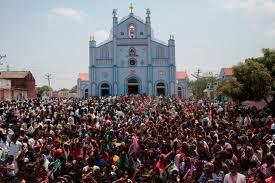 Simultaneously, anti-nuclear activists of neighbouring Kanyakumari and Tuticorin districts blocked arterial roads demanding the scrapping of the nuclear power project. Condemning the arrest of the youths, fishermen of the district abstained from fishing on Saturday. This is the second suchÂ protest by the protesters, who mobilised around 700 boats carrying protesters near the dyke of the KKNPP on October 8.]]>