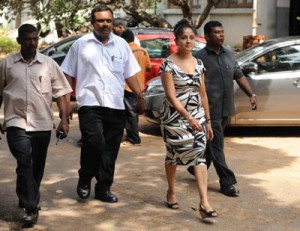 A warrant has been issued to arrest former Sunday Leader Editor Frederica Jansz for failing to appear in court over a contempt of court case filed by a government MP, the Sri Lankan state run Daily News reported today.

The news report said that the contempt of court case filed by a government MP against the Publisher of The Sunday Leader and journalist Frederica Jansz was taken up for inquiry by the Court of Appeal yesterday.

When the case was taken up before Court of Appeal President Justice S. Sriskandaraja, second respondent Frederica Jansz was not present in court despite being warned to appear in court.

As she had not obtained permission from court for her absence, Gamini Marapana PC who appeared for petitioner moved that a Bench warrant be issued for her arrest. The court thereafter issued a warrant to arrest Frederica Jansz and to produce her in court on January 17,2013.

Gamini Marapana PC with Ranjan Sriskantha and Navin Marapana instructed by Tharanatha Palliyaguruge appeared for petitioner while Upul Jayasuriya appeared for the Publisher and Frederica Jansz.