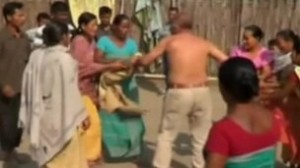 Even though members of the Karnataka state government have  provided broad assurances that they will drop  charges against Naveen Soorinje, the young journalist remains imprisoned two months after  he was arrested for exposing an assault on women by Hindu extremists. Welcome  to Incredible India, where a journalist can be locked up for documenting a  crime against women even as millions express outrage over medieval mindsets  following the fatal gang rape of a Delhi student in December. “We don’t know how sincere these assurances are. They may  just be efforts to stall his release,” Sudipto Mondal of The Hindu told CPJ by phone. Soorinje, a TV reporter for Kannada-language Kasturi TV, was arrested following his report on an attack by right-wing Hindu hooligans in July. Soorinje  had been tipped off that a large group of extremists were about to launch an attack on a party in the port city of  Mangalore in an effort to police women they deemed “morally corrupt” for allegedly  staying out late, drinking, and partying with men belonging to a minority religion.  Upon arriving at the scene, the Hindu extremists chased, beat, and groped young  women, media reports said. Soorinje, who says his calls to the police went unanswered,  caught the crime on camera. The 43 other  individuals who were charged in the episode were identified on the basis of  Soorinje’s footage, according to New Delhi-based investigative magazine Tehelka. But  apparently, no good deed goes unpunished: Soorinje was arrested by Mangalore  police on November 7 and charged with more than a dozen offenses, including  rioting, assault and rioting with deadly weapons,  and using criminal force on women with the intention of outraging their modesty,  according to reports. The charges leveled against Soorinje seem  ludicrous. “An argument is being made that holding a camera is a crime,” Arvind  Narrain, a lawyer with the Alternate Law Forum, a lawyers’ collective based in  the state, told CPJ. Soorinje has denied taking part in the attack and says the charges are in retaliation for  documenting it and for accusing the police of complicity. Furthermore, a witness  on the basis of whose complaint Soorinje landed in jail, has said that he was  made to sign a blank sheet of paper by Mangalore Police, Tehelka reported. Journalists from across the country have been pressing the state government for Soorinje’s release, including a hunger  strike. “There is consensus across activists and journalists that Naveen is  innocent. He’s one in a million for fearlessly exposing the Hindu right,” said  Narrain. Sadly, in naming Soorinje as a co-conspirator, the courts are  making no distinction between him and the attackers. A Mangalore court denied  Soorinje’s request for bail on November 27, G. Vishnu, a Tehelka journalist reporting on the case, told CPJ. Soorinje was denied bail again on  December 26 by the Karnataka High Court. Soorinje’s detention seems indicative of a wider penchant  among Indian authorities to try to silence the messenger rather than deal with  the root problem. On Friday, police charged  Zee News for broadcasting an interview with the companion of the Delhi rape  victim. Sumit Galhotra is CPJ’s first Steiger Fellow. He has worked for CNN International, Amnesty International USA, and Human Rights Watch, and has reported from London, India, and Israel and the Occupied Territories. He specializes in human rights and South Asia. http://www.huffingtonpost.com    ]]>