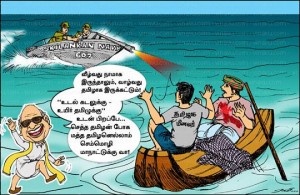 Even though the DMK was holding a conclave on the Eelam Tamil issue Tamil Eelam Supporters Organization (Teso) conference on Sunday, the Sri Lankan navy men have carried out attacks on Tamils fishermen in their own water.

Window panes of a boat, part of 78 which had put out to sea from this coastal town, were damaged in an attack allegedly by Sri Lankan naval personnel, who also took away the fish catch from 10 boats, fisheries department sources said.

They said the Sri lankan naval personnel threw beer bottles and stones at the boat last night damaging the windowpanes. Later they surrounded the boats and threatened them to leave the area, the sources said.

Meanwhile about 11 fishermen’s organisations did not put out to sea for the fifth consecutive day, demanding release of five fishermen arrested by the Lankan Navy in November 2011.