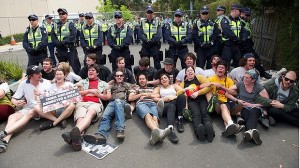 About 400 asylum seekers have been released from Darwin detention centres into the community. They will be placed on bridging visas which forbid them from working, but will receive a basic welfare payment, a spokesman for the Immigration Department said. They were flown out of Darwin today and will be settled into all States and Territories across Australia, with most going to Victoria, NSW and Queensland. The group comprises of would-be refugees arriving before and after the Government announced on August 13 it would send irregular boat arrivals to offshore processing centres on Nauru and Papua New Guineaâ€™s Manus Island. They still risked being transferred to regional processing centres, the department spokesman said. The department has already moved more than 8500 people into these arrangements since the Government announced the use of bridging visas in November last year. Opposition immigration spokesman Scott Morrison said every bridging visa issued by the Government was another reminder Labor could not stop the boats. â€œIt means their detention network canâ€™t hold them (and) they canâ€™t send them to Nauru because their deterrence policies are non-existent,â€ Mr Morrison told Sky News. The news comes as a group of 56 Tamil asylum seekers agreed to drop a High Court challenge against their removal from Australia. The group, in detention in Darwin, had been due to have their case heard today. At issue is the practice of â€œscreening outâ€œ, where asylum seekers are asked to explain why they came to Australia and the circumstances in their home country. The Federal Government has agreed to let the group stay and have their claims processed either in Australia or offshore, subject to 24 hours notice of their involuntary return to Sri Lanka. When asked if the Government intended to return the Tamils, Immigration Minister Chris Bowen told ABC radio: â€œThere will be a range of circumstances in place for those individuals. â€œI wonâ€™t go into those individual cases.â€ Mr Bowen defended the way some asylum seekers were being screened out, saying it was one of the mechanisms to deal with those people coming to Australia for â€œeconomic purposesâ€. â€œYes, itâ€™s controversial, but itâ€™s entirely appropriate,â€ he said. Australian Greens senator Sarah Hanson-Young says the interview process must be set out in law. â€œIâ€™ve been very concerned that this process is so informal, that thereâ€™s no proper legal representation in these interviews,â€ she told ABC radio. Meanwhile, another 46 Sri Lankan men were â€œinvoluntarilyâ€ returned to their homeland today, taking the total number returned since August 13 to almost 750. The Refugee Council of Australia wrote to Mr Bowen yesterday asking him to immediately suspend the forced return of asylum seekers to Sri Lanka. â€œWe are very concerned about what the consequences will be for the people Australia returns to Sri Lanka,â€ council chief executive Paul Power said in a statement. â€œThere are ongoing reports of serious human rights violations in Sri Lanka, including mistreatment of repatriated asylum seekers.â€ AAP, The West Australian. ]]>