Australian Tamil Congress (ATC) has been in the forefront raising awareness and highlighting issues concerning Tamil Community in Australia. We have been raising awareness in media and with politicians of the dire situation and fear of persecution Tamils face in their homeland, which is a push factor for the recent spike in Tamils arriving in Australia claiming asylum. 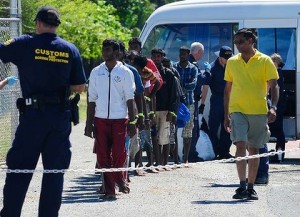 Prime Ministers Expert Panel on refugee issues had a hearing in Sydney on 19 th July 2012. An ATC representative was given an opportunity to address this panel. This opportunity was used very effectively to articulate the Tamil communityâ€™s concerns on this issue. In addition, a well-prepared submission was also made.

In the first category, it highlighted the need to adopt a regional solution, involving key transit points such as Indonesia, Sri Lanka, South India and Malaysia, to prevent high-risk journey by boats. The issues discussed under this topic included:

It was stressed that no Tamil asylum seeker should be sent back to Sri Lanka under the present circumstances.

In the second category, the need for Australia to use its diplomatic influence to raise its concerns with the Government of Sri Lanka regarding on on-going human rights violations and the dire humanitarian situation for many in the former conflict areas of the Tamil majority North and East were highlighted.

Submission reiterated that Tamils were fleeing their homeland in search of safety and security elsewhere due to continuing fear of persecution. In addition, the need for Australia to act, together with other countries, in support of a negotiated political settlement was stressed, with a message that when true peace and reconciliation is achieved in the island of Sri Lanka it will have a definitive and positive impact upon the current trend of Tamils seeking to leave the island.