<![CDATA[The Sri Lankan government is attempting to create another armed struggle in the north and East through its paramilitary group to re-introduce full force of emergency rule to hold its family rule over the country, sources from Colombo told to the Eelam-e-News. <a href="http://www.eelamenews.com/?attachment_id=107576" rel="attachment wp-att-107576"> 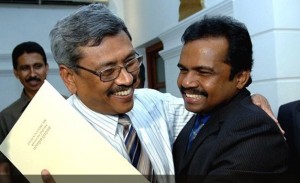 The Sri Lankan military Intelligence Agency has developed plans to dispatch small team to kill their own deputy minister and Karuna paramilitary group leader V Muraleekaran (Karuna), according to current officials. The program was designed in the weeks after the crisis of impeachment against chief justice Shirani Bandaranayake. Officials said that the program was designed as a more “surgical” solution to eliminating political opponents in South, but it is not clear what group were planning the assassinations. Because the Sri Lankan military is operating many para military groups in all around the country, they were responsible for many killing in the past including Tamil MPs Joseph Pararajasingham, RaviRajan and journalists Lasantha wikramathunga and Prageeth Egnaligoda.  ]]>