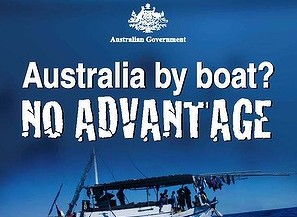 More than 1600 asylum-seekers have arrived since Labor agreed less than a month ago to restore offshore processing on Nauru and Papua New Guinea, with extended periods of detention for those arriving by boat. The government is now likely to fill its 2000-person quota for the centres â€“ 1500 on Nauru and 500 on Papua New Guineaâ€™s Manus Island â€“ before the facilities are completed. But, as boatpeople ignore the new processing regime, the Customs and Border Protection Service has been denied additional funds to advertise the deterrent in asylum-seeker source countries. Itâ€™s understood the agency has $1.3 million left from a $3 million 2011-12 budget allocation for offshore communications campaigns to counter people-smuggling. The new campaign will be run in Afghanistan, Pakistan, Iran, Iraq and Sri Lanka. Opposition home affairs spokesman Michael Keenan said the offshore advertising budget was insignificant given the size of the task. â€œItâ€™s incredibly small, to design a campaign in many different languages and run it across a whole series of countries. â€œThey spent $70 million on carbon tax advertising. And thatâ€™s in one market, let alone trying to take it internationally.â€ Advertising industry sources said in the Australian market, $1.3 million would pay for a â€œshort, sharpâ€ 2-4 week campaign. A Customs spokesman said the service had refocused its strategic communications campaign in key source countries following the governmentâ€™s adoption of the recommendations of the Angus Houston-led panel on asylum-seekers. â€œLocally engaged communications consultants have been engaged in source countries including Afghanistan and Pakistan and are conveying key messages via liaison with local media outlets, including radio, TV and newspapers, online media and grass roots community liaison activities,â€ the spokesman said. The advertisements will tell prospective boatpeople they risk detention in Nauru or Papua New Guinea for as long as they would have waited for a refugee visa if they had applied through official channels rather than boarding a boat. A parallel campaign will be run in Australia by the Department of Immigration and Citizenship, targeting refugee communities. Under a key recommendation of the Houston panel, adopted by the Gillard government, asylum-seekers arriving by boat will secure â€œno advantageâ€ by failing to apply for refugee visas through official channels. Almost 200 asylum-seekers have been intercepted on three boats over the past two days. Refugee advocate Ian Rintoul said the continued flow of asylum boats proved the new offshore processing regime was a failure. â€œThe government is now confronted with the reality of its Pacific Solution 2.0,â€ he said. â€œNauru is already full. And the quota for Manus Island is likely to be filled in the next week or two at the most.â€ (The Australian)]]>