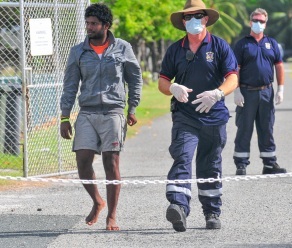 The deportation of 56 Tamil men was halted after a dramatic hearing at the High Court in Sydney late on Monday. The department agreed to halt the men’s forcible deportation, expected to take place this morning (TUESDAY) and all parties will reappear in court on Thursday. A department spokesman said it was ‘‘not uncommon’’ for the department to face legal challenges of this kind, but no other deportations would be affected by the hearing. He said the department “will continue to remove unlawful non-citizens where it is in accordance with the Migration Act”. The court action was brought by refugee advocate Ian Rintoul and Bala Vigneswaran from the Australian Tamil Congress. Tamil community supporters had become highly upset after the Immigration Department moved on Friday to forcibly deport several Tamils. A list of 56 Tamils in the detention network and threatened with deportation was drawn up and on Sunday lawyers received written instruction from seven men. Mr Vigneswaran said he was deeply concerned the asylum seekers were not being given a fair hearing. “If they file their case and they are found not to be refugees, that is understandable. But not to given them an opportunity to present their claims properly is unfair,” he said. A department spokesman said no blanket decision had been taken not to accept Sri Lankans and each claim would be assessed individually. But he said a claim by a person they face persecution in their home country did not automatically trigger Australia’s international obligations. Mr Rintoul said 35 Tamil men who Australia had returned to Sri Lanka had been arrested last friday and taken to Negombo prison, outside Colombo. He said several of them had told Australian officials of their fears of return, and said they would rather die than be sent back. “Screening out is a travesty of justice,” Mr Rintoul said. “All asylum seekers should have access to independent legal advice.” (Peninsula Weekly)]]>