The Australian Labor government has hailed the so-called voluntary return of 48 asylum seekers to Sri Lanka as a victory for its revival of the â€œPacific Solutionâ€, involving the indefinite detention of refugees on remote Pacific islands.

Two groups of asylum seekers have been flown back to Sri Lanka in the past week, after reportedly choosing this over incarceration for many years on Nauru or Papua New Guineaâ€™s Manus Island. Vulnerable people are being pushed back to Sri Lanka despite clear evidence that asylum seekers, particularly Tamils, are in grave danger of persecution and torture.

Prime Minister Julia Gillardâ€™s government is blatantly violating refugeesâ€™ basic legal and democratic rights, including those enshrined in the international Refugee Convention. Immigration Minister Chris Bowen openly stated that the government hoped that many more refugees would return to the countries they fled, and that asylum seekers would soon stop trying to sail to Australia altogether. â€œThis government is determined to break the people smuggling trade and stop people getting on those dangerous boats,â€ he declared.

Contrary to the governmentâ€™s claim that it is acting to â€œsave livesâ€ by deterring boat voyages, the entire thrust of the brutal new refugee regime is to endanger their lives and well being.

Human Rights Watch, a US-based organisation, has detailed 13 credible cases since the end of Sri Lankaâ€™s protracted civil war in 2009 where failed asylum seekers were deported from Europe and then tortured in their home country. Freedom from Torture, a British group that compiles medical reports of torture victims, has documented a further 24 cases where â€œvoluntary returneesâ€ have been tortured. These cases are likely to be the tip of the iceberg, because they involve incidents in which the victims managed to flee Sri Lanka a second time and find their way back to Europe.

Like the Australian government, the British and other European governments are stepping up refugee deportations to Sri Lanka.

The Sri Lankan government claimed that the 48 returnees from Australia were released soon after they arrived, but not before they were questioned by immigration officials and the police, including the Criminal Investigation Department and the Terrorist Investigation Department. There is a proven record of such returnees being later arrested and beaten, or â€œdisappearingâ€.

In 2010, the Edmund Rice Centre, an Australian Catholic agency, visited Sri Lanka and found that all the asylum seekers sent back there had been detained, and some were assaulted in custody. It reported that the authorities viewed any Tamil who fled the country as a sympathiser of the separatist Liberation Tigers of Tamil Eelam (LTTE), and any Sinhala refugee as a traitor.

The agency also found that nine asylum seekers removed back to Sri Lanka by Australiaâ€™s previous Howard government were later killed. These and other killings of refugees deported from Australiaâ€”including 21 who died in Afghanistanâ€”were documented in two Edmund Rice Centre reports, Deported to Danger and Deported to Danger II.

The Gillard government has stepped up its collaboration with the Sri Lankan military and President Mahinda Rajapakseâ€™s police-state apparatus in intercepting refugee boats sailing from Sri Lanka. Australian Federal Police based in Colombo are working closely with the Sri Lankan Navy and Coast Guard.

Sri Lankan High Commissioner to Australia, Admiral Thisara Samarasinghe told Australian Broadcasting Corporationâ€™s â€œLatelineâ€ program on September 21 that his government was grateful. â€œThey are helping at the moment and we would like more co-ordination and this has been discussed,â€ he explained.

The alliance between the Gillard government and the Rajapakse administration is in flagrant violation of the Refugee Convention, which prohibits a government from refouling (returning) asylum seekers to the countries they are fleeing because of persecution.

The Labor government has closely collaborated with the Sri Lankan regime since the communal war ended in May 2009. In early 2010, Labor froze the processing of all asylum claims from Sri Lanka for at least three months, and those from Afghanistan for at least six months. It claimed that conditions were improving in Sri Lanka, based on assertions by the Colombo regime itself that no one, including Tamils, faced persecution.

In reality, the Sri Lankan government now lies about its numerous abuses of democratic rights in the same way that it denied that the military was responsible for war crimes during its operations against the LTTE, when tens of thousands of civilians were killed. Since the LTTEâ€™s defeat, hundreds of people, mainly Tamils, have been murdered or â€œdisappearedâ€ by pro-government death squads.

The Gillard government, like the Howard government before it, is trying to bribe refugees to return, by offering them relocation packages of $US3,300. Reports have already emerged of asylum seekers signing up to return, only to be denied the cash when they arrived in Sri Lanka, often on the spurious ground that they helped so-called people smugglers to organise their voyages. The International Organisation for Migration, a UN agency, confirmed that financial assistance had been refused to 7 of the 18 returnees in the first group flown out of Australia.

The Labor government has sought to terrorise refugees by dumping 150 of them to live in military tents on Nauru, where it hopes to house 1,500 within weeks, then another 600 on Manus Island. Despite these measures, desperate asylum seekers have continued to sail to Australia, with more than 3,000 intercepted this year.

The Liberal-National Party opposition is demanding that the government order the navy to force all boats from Sri Lanka to turn back. The government is in fact already trying to do that, in partnership with the Rajapakse administration.

The appalling conditions on Nauru has already provoked unrest among the first contingent of asylum seekers detained there. Three men were detained in a police station on the Pacific island after there was a â€œdisturbanceâ€ at the refugee processing centre that reportedly caused damage to kitchens, tents and lights. Few details have been revealed about the incident.

Immigration Minister Chris Bowen declared: â€œWe had a disturbance and this was because, unsurprisingly, some of the people donâ€™t want to be there … While any behaviour like this is completely unacceptable, when you have people that clearly donâ€™t want to be there, you have to expect some damage from time to time.â€ He added that criminal charges may be laid by Nauru police. 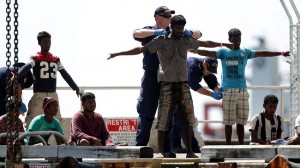