Damascus had been largely kept apart from the 16-month conflict in Syria that has claimed an estimated 18,000 lives, with an air of normality pervading the streets while Homs, Syria’s third largest city, was reduced to rubble and towns across the country burned. Now, the oldest continually inhabited city on the planet is witnessing humanity at its worst: armed gangs marauding with knives, artillery strikes in built-up areas, and fears of chemical weapons being used. 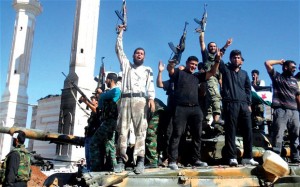 The killing of four senior regime figures on Tuesday, just three miles from the presidential palace, is a particular blow, putting the Syrian president among those who have now lost relatives in this bloody conflict.

Assad is no Saddam Hussein; while the Iraqi dictator was a one man show, the Syrian president has relied far more on an inner cabal, including his brother-in-law, Assef Shawkat, who was among those killed.

Shawkat was a colossus-like figure within the security establishment and sometimes referred to as the “second president”. The US imposed sanctions on him in 2006 after he was linked to the car bomb assassination of former Lebanese prime minister, Rafik Hariri. Live by the bomb, die by the bomb, it would seem.

When I lived in Syria in 2005 my neighbours would often speak of the safety of their cities compared to the chaos of Iraq, only hours to the east. But fear has long been an essential ingredient of the regime’s control. When I was reporting from the north-east of the country back in 2006 I was shadowed by no fewer than 18 men in the ubiquitous leather jackets and brown shoes of the secret police. A year later a visa problem meant I spent a short time in a Syrian prison, where I met people who’d been held for months and whose terrified eyes told their own story.

Today, the lava from the Free Syria Army’s “Operation Damacus Volcano” is melting that fear away, along with Assad’s security infrastructure. But with it also go the certainties of Syria’s geopolitical relationship with the region.

Much will depend on how the regime falls. It is unlikely that an Egyptian-style transition can now be achieved, as too much blood has already been spilt. Instead, we look to Libya and Yemen, where civil conflict eventually led to the death of Colonel Gaddafi and then to the partially-managed transition of President Ali Saleh.

A key question would be whether the Russians are able to facilitate Assad’s exit in a “civilised manner”, as Kremlin diplomats have suggested, or whether Assad will meet a similar fate to Gaddafi.

What is clear is that this week’s events have cut estimates of the regime’s lifespan from years to months. Assad’s expected fall will send shockwaves across the region. It would have particular ramifications for the escalating Israel-Iranian conflict. The suicide bombing in Bulgaria that killed five Israelis on Wednesday has been blamed by US officials on Hezbollah operatives. Whilst Iran is Hezbollah’s core patron, it is heavily reliant on the land bridge and strategic depth provided by Syria. A post-Assad government in Damascus would be likely to cut ties with Hezbollah, which has stayed loyal to the regime throughout the conflict. A key node of Iranian influence would thereby see its wings clipped, and although still dangerous in the short term, with a rumoured arsenal of some 40,000 rockets, Hezbollah’s ability to re-supply would be crippled.

Lebanon itself, a country largely divided into pro and anti-Syria factions since 2005, would be entering a new era potentially free from the constant corruption and threats of assassination emanating from their eastern neighbour. What happens next in Lebanon will be influenced by how much overspill comes from Syria. Wednesday’s bombing in Damascus prompted the outbreak of fighting in the northern Lebanese city of Tripoli, between neighbourhoods divided, ironically enough, by a road called “Syria street”.

Meanwhile, the Israeli-occupied Golan Heights, for decades one of the quietest borders in the region, could find itself back in play as a strategic flashpoint. As the Assad regime has haemorrhaged control over the past 16-months, al-Qaeda affiliated groups have rushed to fill the vacuum. Israel may well see the predictable enemy it knows in Assad replaced by a variety of terrorist start-ups able to operate right at the border.

The geopolitical role of Assad’s Syria was once described to me by a Western diplomat as that of a pyromaniac with a fire extinguisher. In terms of its influence on factions in Lebanon, Palestine and Iraq, Syria has traditionally been happy to help mediate problems that it unleashed. While a post-Assad Syria is almost guaranteed a period of instability after more than 40 years of one-family rule, its demise would force a significant recalibration of the balance of power across the region.

James Denselow is a writer on Middle Eastern politics based at Kings College London. (The Telegraph).