<![CDATA[A police officer has been injured after police came under attack by loyalists in Belfast after a rally turned violent. Two thousand people were protesting a decision to restrict the number of days the Union flag will fly from Belfast town hall. <!--RTEditor:genereated-->There was also trouble on Newtownards Road. It follows “pockets of disorder” on Friday, where eight police were injured and 13 people arrested, including a boy of 13. Police sources claim that loyalist paramilitaries have organized some of the violence over the flags. Loyalists, or unionists, want Northern Ireland to remain part of the UK. Police were on Friday “dealing with minor disturbances in the Shaftesbury Square area,” according to a spokeswoman for the Police Service of Northern Ireland. 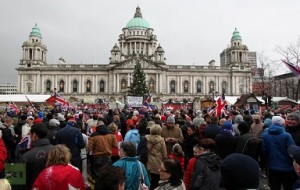 The road was closed to traffic while witnesses said protesters attacked officers with stones, bottles and other missiles. Protests in Belfast erupted after a Catholic majority in the city’s council voted on December 3rd to limit the number of days the Union flag could be flown over City Hall to 17, meaning it will be taken down for the first time since the building opened in 1906. The controversial vote sparked rioting in which 15 police officers, two security guards and a press photographer were injured. Nationalists in the council, who do not want to be part of the UK, had wanted to take the flag down altogether but in the end opted for a compromise proposed by the Alliance party. Unionists have said they find the changes regarding the flag to be an attack on their national identity. (RT News).]]>