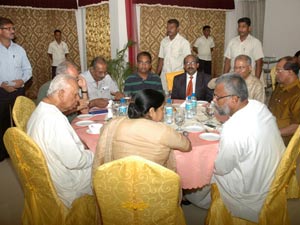 The BJP Monday demanded a meeting between Indian fishermen and the Sri Lanka Navy following the deaths of fishermen from Tamil Nadu in alleged attacks by the island nation’s navy. “Some time ago I heard two fishermen were killed by Sri Lankan navy, and recently I heard five fishermen were killed,” said Sushma Swaraj, leader of the opposition in the Lok Sabha. Minister of State for Defence Jitendra Singh promised to convene such a meeting soon but highlighted the need for Indian fishermen not to cross the international maritime boundary. “The Indian and Sri Lankan maritime boundaries are close and are sometimes crossed,” he said. “Indian fishermen cross the maritime boundary and come in the way of merchant ships.” He said the Joint Working Group between the two countries formed in 2004 to address the issue had met four times: in 2005, 2006, 2011 and 2012. Tamil Nadu leaders have repeatedly accused the Sri Lankan navy of attacking and killing Indian fishermen in the sea, particularly after the end of the Tamil Tigers in 2009. Tamil Nadu Chief Minister J. Jayalalithaa has accused the Congress-led central government of not doing enough to end the recurring killings. P.C. Chacko of the Congress separately criticised the central government for doing little to secure the release of Indian sailors taken captive by Somalian pirates despite several reminders. “There has been no action from the government to secure these fishermen; a crisis management group should start working now,” said Chacko during the question hour. Stating the that issue was under the external affairs ministry’s domain, Jitendra Singh assured the house that the Coast Guard would do whatever was needed. (IANS)]]>