The Tamil community in the UK commemorated Black July on Sunday.

The event was held in the UK, with the local community turning up in numbers to pay their respects in London. 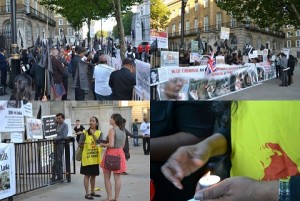 The British Tamil forum organised an event and protest to remember the 22nd Black July in front of the British prime ministerâ€™s house in Dawning Street.

Tamils from different parts of the UK gathered and protest against the Sri Lankan genocide.