Tamils in Paris, France held an event to commemorate the Black July massacre on Sunday.

Tamils from across Paris gathered to pay their respect by laying flowers at a memorial. 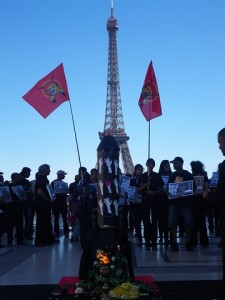 Member of the human rights activists gave speeches remembering the victims of the massacre.

In July 1983, communal violence erupted in Sri Lanka and between 3000 Tamils were killed. Black July was a highly organized mob violence that had political backing. Following the conflict, more than 18,000 houses and numerous commercial establishments were destroyed.