<![CDATA[At least 232 people have been killed in a Brazilian nightclub fire sparked by what witnesses described as a flare or firework lit by members of a band performing onstage. Many of the victims died inhaling toxic fumes during the rush to escape through the venue's single exit, according to local media reports in the southern city of Santa Maria. Police Major Cleberson Braida Bastianello said officials counted 232 bodies brought for identification to a makeshift mortuary at the city gymnasium. He lowered the death toll from the 245 earlier believed killed. Television images showed smoke pouring out of the Kiss nightclub as shirtless, young male partygoers joined firefighters in wielding axes and sledgehammers, pounding at windows and walls to break through to those trapped inside. Teenagers sprinted from the scene desperately trying to find help others carried injured and burned friends away in their arms. "There was so much smoke and fire, it was complete panic and it took a long time for people to get out, there were so many dead," survivor Luana Santos Silva told the Globo TV network. Silva added that firefighters and ambulances responded quickly after the fire broke out, but that it spread too fast inside the packed club for them to help. Michele Pereira, another survivor, told the Folha de S. Paulo newspaper that she was near the stage and that the fire broke out after band members lit flares. "The band that was onstage began to use flares and, suddenly, they stopped the show and pointed them upward. At that point the ceiling caught fire. It was really weak but in a matter of seconds it spread," Pereira said. <a href="http://www.eelamenews.com/?attachment_id=108922" rel="attachment wp-att-108922"> 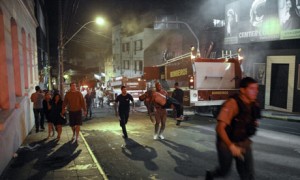 After the fire was extinguished, bodies were ferried by truck to the gymnasium. The Globo newspaper said the first truck carried 67 bodies and the second 70. “People started panicking and ended up treading on each other,” a fire chief, Guido de Melo, told local media. Fire department officials will issue a detailed report after a full investigation. Many of the dead are likely to be students because Santa Maria is a university centre for the Rio Grande do Sul region and the usual class schedule had been disrupted by strikes. (The Guardian).]]>