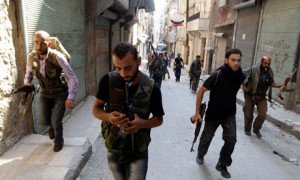 Britain is establishing official contacts for the first time with the Free Syrian Army and more than tripling its humanitarian and other non-lethal aid to opposition and human rights groups.

The government has argued that the Syrian population could not wait indefinitely for a diplomatic solution to the conflict.

The £5m in new aid will go to recipients inside Syria rather than the exile groups that the UK has funded until now. That shift of emphasis coupled with the dispatch this week of Jon Wilks, the UK’s special envoy to the Syrian opposition, to Istanbul to make direct contacts with FSA representatives reflects a loss of patience with the diaspora-led Syrian National Council (SNC). It is a diverse umbrella group that western capitals hoped would become a strong and united voice of popular opposition to Bashar al-Assad’s regime.

The most recent attempt at unifying the group sponsored by the Arab League in Cairo last month, dissolved into chaos as fights broke out and a Kurdish group walked out. The equally disparate anti-government militias fighting under the FSA banner also refused to accept political direction from the SNC.

“At the beginning, all of our efforts were focused on engaging with those who we could engage with quickly, and that meant the diaspora,” an official said. “But we always knew it would be important to engage with the local opposition. When we get to the end of the day, we know it won’t just be the SNC sitting around the table. It will be people doing the legwork on the ground.”

Announcing the new initiative, the foreign secretary, William Hague said: “Given the role that the Free Syrian Army is playing now in affairs in Syria it is important to be in discussion with them, political discussion about the way forward and about the way in which they work with other opposition groupings … So it’s discussions about those sorts of things rather than military advice or tactics that we are discussing with the, with the Free Syrian Army.”

Pointing to the impasse at the UN security council, Hague said: “The people of Syria cannot wait indefinitely … The Syrian people need urgent help, and today we are greatly increasing what we will do to support them.”

The new aid will go to NGOs and human rights monitoring groups. It will be in the form of communications equipment “used to warn civilians of impending regime assaults”, training in documenting atrocities and upholding human rights.

Hague insisted the UK had no intention of sending arms to the FSA, saying: “It would be hard to guarantee how it would be used.”

He added: “There have been reports of atrocities on the opposition side in Syria, which we condemn just as we condemn atrocities, the many atrocities carried out by the regime.”

A British official said that one of the main messages Wilks had taken to FSA representatives in Istanbul was to urge them to focus on their human rights obligations. “It is important to send the message to the political arm of the FSA to say you have got responsibilities. We are saying: Be careful, you are being watched very carefully.”

British officials said the FSA representatives they would talk to had been carefully vetted to ensure there was nobody with “blood on their hands”. Some might have a military background but none would be currently involved in the fighting.

Julien Barnes-Dacey, a Syria expert at the European Council on Foreign Relations, said: “The British invested very heavily in the SNC for a long time and they gave them chance after chance to get their act together.

“But they have not been relevant for a long time, and the British have given up on them. That is a clear shift of the past few months.”

However, Barnes-Dacey was sceptical about whether Wilks would be able to find anyone in Istanbul who could be accurately be described as the political arm of the FSA.

“That is completely wishful thinking,” he said. “There is no such thing as the FSA in any organisational form, just different groups on the ground that identity themselves as the FSA.” (The Guardian).