<![CDATA[Downing Street has said that the British government will dispatch 350 troops to Mali to aid French troops stationed in the country's north, as part of a UK mission to train local forces and engage in â€œforce protection.â€ <!--RTEditor:genereated-->Â­ 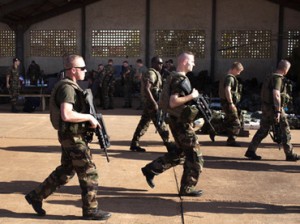 British representatives are attending a meeting in Brussels on Tuesday to discuss the provision of troops as part of an EU mission to the African country. The EU estimates that 500 supplementary troops will be sent to Mali, some 350 of which will be British. This will include approximately 40 military advisers who will train soldiers in Mali and 200 British soldiers to be sent to neighboring African countries. An ECOWAS (Economic Community Of West African States) force of West African troops â€“ about 7,500 of them â€“ are also coming into Mali to take over some garrison duties, and steadily take over the fighting role from the French. The budget for the campaign, which has been set at around $950m will be financed through an international donors’ conference based in Ethiopia. British Prime Minister David Cameron told French President FranÃ§ois Hollande on Sunday evening that the UK was keen to provide military assistance in Mali and West Africa, including the training of local forces. London reiterated that British troops would not be participating directly in combat, but would be providing armed â€œforce protection.â€ However, Downing Street did state that the country has both the â€œcapability and capacityâ€ for a larger deployment. The country has already supplied two C-17 military transport aircraft and a Sentinel surveillance plane. â€œTwo weeks ago we started by offering transport planes to France; we then sent force protection to back up the transport planes, we sent trainers, we have additional force protection to protect them,â€ UK Labor MP Jeremy Corbyn told RT. Corbyn expressed concerns that the new conflict in Mali very much resembles the â€œFrench reaction of Afghanistan in 2001.â€ That war, which started in a â€œhunky-doryâ€ manner, later developed â€œinto a greater war which is now going on for 11 years,â€ he explained. France has declared that, so far, they are â€œwinning this battle.â€ It the past two weeks, French forces have had major successes in pushing back the Islamist troops who seized strongholds in northeastern Mali. The French gained a footing in the ancient city of Timbuktu as recently as yesterday. Islamist forces seized control of Timbuktu last April, imposing sharia law in the city. France responded to calls from the Malian government to suppress the uprising that was gripping the country. Prior to leaving, the Islamists set alight toTimbuktu’s world-famous research center, the Ahmed Baba, which opened in 2009 and housed over 20,000 documents, including medieval manuscripts, many of which remained unstudied. The destruction has been labeled â€œcultural vandalismâ€ and a â€œdevastating loss.â€ (RT News)