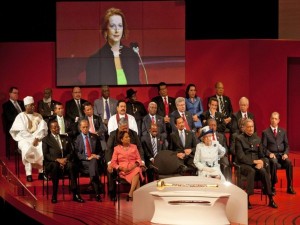 Britain has not decided if it would attend the Commonwealth Heads of Government Meeting (CHOGM) summit in Sri Lanka in November and at what level it will attend, the Guardian newspaper said.

A spokesperson for the British Foreign Office said that a decision had yet to be made on whether the UK would attend the summit, and if it did, who would attend.

â€œThe decision to hold the meeting in Sri Lanka was taken by the Commonwealth as a whole in 2009 and reaffirmed in 2011. We respect the collective will of the Commonwealth,â€ he said, adding that the meeting was an opportunity to put the spotlight on Sri Lanka, human rights concerns and efforts to improve peace and security.

The opposition has stepped up pressure on the government to state how it would approach the controversy surrounding CHOGM. Ann Clwyd, a Labour MP and member of the Foreign Affairs select committee, said that holding CHOGM in Sri Lanka sent the wrong signal on the countryâ€™s human rights situation, which she described as â€œappallingâ€.

On the question of trade ties as a factor in the UK governmentâ€™s deliberations, she said: â€œPeople shouldnâ€™t be forced to give up values on the trade altar. Trade is important in terms of jobs in this country. Itâ€™s always a difficult issue for people to speak about but I would say that it really should not be used as a bargaining tool.â€

Douglas Alexander, Labourâ€™s shadow foreign secretary, said: â€œWe have repeatedly said that, whilst the Sri Lankan government fails to meet its international obligations, the British government must use the prospect of the forthcoming Commonwealth meeting in Colombo to pressure them to do so.

â€œThe prime minister must urgently raise with the Sri Lankan government the need for a full, independent, international investigation into the allegations of war crimes committed by all parties. Withholding his attendance at the conference until progress has been made is one of the tools at the Prime Ministers disposal.â€