<![CDATA[CRITICS of Sri Lanka's human rights record are calling for a boycott of  the  national cricket team's tour of Australia and say the Boxing Day Test will be an  opportunity to protest. <a href="http://www.eelamenews.com/?attachment_id=107001" rel="attachment wp-att-107001"> 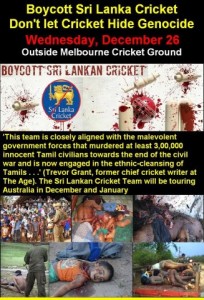 Two groups have called for a boycott ahead of the first Test in Hobart this  week, prompting a scathing rebuke from Sri Lankan high commissioner Thisara  Samarasinghe. Claiming inspiration from the former anti-apartheid sporting sanctions  against South Africa, the Tamil Refugee Council and the Refugee Action  Collective in Victoria are pushing for the boycott. ”There will be a stain of injustice that won’t wash out of the cricket  whites if the human rights abuses of the ruling Sri Lankan regime pass  unremarked,” the groups say in an open letter. Mr Samarasinghe branded their call unworthy of attention, saying of the Sri  Lankan team: ”They have not come from the back door. They have been welcomed by  your government and everybody in the system, so don’t let this great country be  spoiled by people like this.” The call has provoked a mixed reaction from refugee advocates, with some  arguing that the Boxing Day Test represents an opportunity to get information to  a mass audience, and they plan to distribute leaflets attacking Sri Lanka’s  treatment of Tamils to cricket fans. Former prime minister Malcolm Fraser has called for an independent assessment  of the situation in Sri Lanka, including whether members of the Tamil minority  are being persecuted and how those sent back from Australia after coming here by  boat are being treated. If an inquiry found that Tamils were still being persecuted and if verifiable  commitments were not given that this would stop, ”then the international  community has got to take action”, Mr Fraser told Fairfax Media. The Australian Tamil Congress’s Bala Vigneswaren supported the boycott call,  saying the Australian Cricket Board should apply the same standard to Sri Lanka  that was applied to South Africa when that country was boycotted. The boycott call came as opposition immigration spokesman Scott Morrison  announced that he and foreign affairs spokeswoman Julie Bishop would travel to  Sri Lanka for meetings with government officials at the end of January. ”We’ll also go up and visit the Tamil areas in northern Sri Lanka and see  things on the ground there,” Mr Morrison told Sky News on Sunday. Mr Samarasinghe has previously dismissed claims of continued persecution of  Sri Lanka’s Tamil minority, describing those who have attempted to come by boat  as ”economic opportunists”. Those talking of boycotts had a vested interest  and should not be taken seriously, he said. The two groups defended their action. ”Sporting boycotts have been important  in building international pressure against cruel regimes and human rights abuses  before. There is no good reason Sri Lanka should escape this pressure,” they  said. The National  Times    ]]>