David Cameron is to press the case of the British-backed Eurofighter Typhoons during a visit to India next week, amid hopes that New Delhi’s plans to buy a rival French jet in a $14bn (Â£9m) deal may collapse. 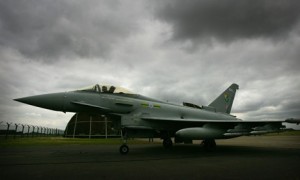 Amid signs that the prime minister’s trip could be overshadowed by a row over a separate Â£483m helicopter deal, No 10 made clear that Cameron would go out of his way to promote the Eurofighter when he meets his Indian counterpart Manmohan Singh.

The prime minister is to make a renewed push for the Eurofighter after FranÃ§ois Hollande, the French president, failed to finalise a deal to sell 126 Dassault Rafale fighter planes to Delhi during a trip to India this week. Delhi opted for the French jet in a $14bn deal last year, nudging aside Eurofighter which is made in part by BAE Systems.

A Downing Street official said: “We respect the fact that the Indians have chosen their preferred bidder and are currently negotiating with the French. Of course, we will continue to promote Eurofighter as a great fast jet, not just in India but around the world.”

A government source added: “Hollande was in India this week and a deal has not been signed so we will want to find out from the Indians how their talks are progressing with the French.”

India and France insisted that they were still determined to finalise the Rafale deal. In a joint statement Hollande and Singh cited the “ongoing progress of negotiations” and added that they “look forward to their conclusion”.

Cameron will start his second official visit to India, which will last three days, on Monday as the Indian defence ministry moved to cancel a deal to purchase twelve AgustaWestland luxury AW101 helicopters which are built at the company’s Yeovil plant. The Times of India reported on Friday that the defence ministry had issued a formal “show-cause notice” to the Somerset subsidiary of the Italian defence manufacturer Finmeccanica to explain within a week why the contract should still go ahead.

The ministry has frozen payments for the helicopters and has despatched a team from the Central Bureau of Investigation (CBI) to Italy after Italian police arrested Giuseppe Orsi, the chairman and chief executive of Finmeccanica as part of an investigation into allegations that bribes were paid to Indian government officials. Orsi, who denies the allegations, resigned on Friday.

Sitanshu Kar, an Indian defence ministry spokesman, said in a statement: “[The Ministry of Defence] today issued a formal show cause notice to AgustaWestland of UK seeking cancellation of contract. The operation of the contract has been put on hold. The company has been asked to reply to the notice in seven days.”

The row over the helicopters is likely to dominate parliamentary proceedings in Delhi as the prime minister visits the Indian capital. Brinda Karat, a politburo member of the

Communist Party of India (Marxist), told the Hindustan Times: “We are not happy with the CBI probe announced by the government, because it acted against the VVIP helicopters matter only after it surfaced in Italy. So, we would like the CBI investigations under supreme court’s monitoring.”

Defence sales to India will be at the heart of the prime minister’s visit, which will largely focus on trade. Britain is confident that a deal to buy 145 M777 Howitzer artillery pieces, manufactured by BAE Systems, to India at a cost of around $0.5bn will soon be sealed.

The prime minister will also be making the case for Tesco which is struggling to break into the Indian market.

The supermarket giant has a wholesale business in India and has teamed up with Tata to run the Star Bazaar hypermarkets.But Tesco is unable to operate what is known as a “multi-brand retail operation” in India â€“ industry speak for proper Tesco outlets selling its own goods. The Indian government is reforming the law to open up the market to international supermarket chains. But Tesco is concerned that the new legislation that is going through parliament imposes an unfair burden on the proportion it would have to pay towards the local infrastructure around new hypermarkets and the high level of local goods they would have to sell.

A government source said: “We do expect the issue of removing barriers to trade to come up during the trip as part of working together with the Indians to open up markets and to unleash opportunities for our businesses to succeed.” (The Guardian)