<![CDATA[After 500 men, women and children arrived off Vancouver Island in 2010, some were held for up to a year in prison facilities. When the sea-battered cargo ship MV Sun Sea attempted to reach land off Vancouver Island on Canada's west coast in 2010 – overloaded with nearly 500 Tamil asylum seekers – its weary inhabitants couldn't have known that they would soon be used as political pawns in their chosen safe harbour of Canada, but that's exactly what happened. <a href="http://www.eelamenews.com/?attachment_id=107140" rel="attachment wp-att-107140"> 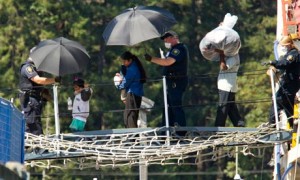 The Canadian government detained the men, women and children of the Sun Sea in a provincial prison for months – some for over a year – while raising the spectre of human smuggling and terrorism arriving on Canada’s shores in the form of the Tamil Tigers. “Canadian officials will look at all available options to strengthen our laws in order to address this unacceptable abuse of international law and Canadian generosity,” the Canadian public safety minister, Vic Toews, said in a statement on the arrival of the Sun Sea. Fast forward to the present, and the government’s response to the Sun Sea may have foreshadowed justifications for the profound changes now under way in Canada’s immigration and refugee policies through the passage of Bill C-31 in June. It’s an omnibus bill that further turns Canada into one of the only western countries that detains asylum seekers in prison facilities, according to the 2012 Global Detention Project report on Canada. Other than a few beds at Vancouver International Airport, British Columbia, unlike Ontario and Quebec, does not have dedicated immigration detention facilities. But like the other provinces, security is contracted out to the private sector. Nearly 200 male Sun Sea passengers and crew were housed in a makeshift detention area set up in the yard of the Fraser Regional Correctional Centre; women went to the Alouette Correctional Centre, and those with children went to the Burnaby Youth Custody Services Centre. There are two passengers still being detained, and two crew members facing charges relating to the voyage of the Sun Sea; it’s been reported that 28 have been accepted as refugees, 43 have been rejected, and another 23 claims have been withdrawn. “For me it’s a complete waste of taxpayers’ money, detaining these guys for such a long time and also the way they treated the children and the parents,” said Sam Nalliah, a member of Vancouver’s Tamil community who has been supporting the Sun Sea refugee claimants since they arrived. “One guy came with his son; he was kept in the Maple Ridge Correctional Centre. They [the CBSA] don’t have the facilities to keep the kids there, so they decided to keep the kid in the Burnaby Correctional Centre – at that age it can do a lot of psychological harm to the kids.” “I see it as particularly problematic that people are detained in facilities that are designed to be punitive – when in fact, they’re not supposed to be punished at all,” said Peter Edelman, a Vancouver-based  immigration lawyer who is representing crew members of the Sun Sea. “Living conditions at detention centres are like those at a two-star hotel with a bit of security,” said federal Immigration Minister, Jason Kenney, during a House of Commons debate in June. “The facility in Toronto was once a hotel; it’s now been converted into a prison. The facility at Laval [Quebec] has always been a prison – it belongs to Corrections Canada. Certainly in both cases they’re essentially prisons, they’re operated as prisons,” said Janet Cleveland, a psychologist at McGill University in Montreal who studies the effects of detention on asylum seekers. Speaking about the privately run Toronto Immigration Holding Centre (IHC) Cleveland added: “There’s high fences topped with razor wire, there’s no freedom of movement within the facility from one section to another, there’s surveillance cameras everywhere, there’s security guards everywhere. People are searched when you move from one area to another.” Toronto immigration lawyer Aadil Mangalji shares Cleveland’s view of the Toronto IHC, pointing to the bars on the windows, and how men are housed on separate secured floors from the women and children. Visitors are separated from detainees by a glass partition, where they talk by phone. “It feels like a jail,” said Mangalji. Several lawyers and advocates for former or current detainees of the IHC stressed that generally detainees are reluctant to talk to the media for fear of upsetting their host country, while Nalliah claims that on the west coast some Sun Sea claimants were instructed specifically not to talk to the media upon their release from detention. The Canadian border services agency denied that claim in an emailed response to the Guardian. “Most of these guys didn’t complain about the conditions of the prison or their stay there. For them their treatment from the CBSA was pretty bad,” said Nalliah, adding, “This batch of refugees has been treated very shabbily.” (The Guardian).]]>