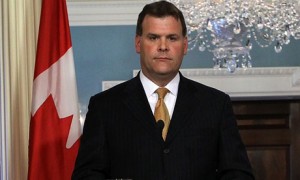 Canadian Foreign Affairs Minister John Baird says the Commonwealth is failing its greatest test by letting Sri Lanka host this yearâ€™s leaders summit but yet Canada has no intention of leaving the organization, the Vancouver Sun reported.

Canada has been alone in threatening to boycott Novemberâ€™s Commonwealth Heads of Government Meeting in Colombo unless Sri Lanka improves its human rights record and moves towards post-civil war reconciliation with the countryâ€™s Tamil minority.

In addition to hosting the summit, Sri Lanka is also in line to serve as the institutionâ€™s chair for the next two years â€” which Canada and other critics believe would seriously undermine the groupâ€™s moral authority and its ability to persuade other errant regimes to mend their ways.

Days after expressing frustration that Sri Lanka and the upcoming summit were not on the agenda of a Commonwealth foreign ministersâ€™ meeting, Baird appeared before a parliamentary committee and reiterated his criticisms of the Asian nation, the Vancouver Sun reported.

â€œWeâ€™re tremendously concerned about the deteriorating and authoritative trend of the government in Sri Lanka,â€ he told the Commonsâ€™ foreign affairs committee.

Speaking to reporters afterward, Baird said the fact Canada is the only country speaking out reflects poorly on the Commonwealth as a whole.

â€œI think this is a test,â€ he said, â€œand by all accounts at this stage, the institution isnâ€™t responding well to the challenge.â€

But aside from threatening to boycott the next Commonwealth leaders summit, Baird did not say what other steps Canada might take.

Asked if the government was contemplating leaving the organization, he replied: â€œNot at this time.â€

Canada is the Commonwealthâ€™s second-largest donor, and the institution would be in dire straits if Canada were to withhold the $25 million it contributes every year.

Dewar said the government should review all options, but the first step is declaring categorically that Canada will not be attending Novemberâ€™s leaders summit.

â€œWe should not participate, period,â€ he said. â€œRemember apartheid? We led strongly in that. Thatâ€™s what we should be doing. Not a little bit here, a little bit there. Just be very strong and say â€˜Weâ€™re not going to participate.â€™â€

Baird said the government and Canadian diplomats have been pressing other Commonwealth countries on the issue, but he would not comment on why those efforts have been unsuccessful.

â€œThis is a tremendously difficult file,â€ he told the committee. â€œAnd if Canada is the lone (country) to stand up and speak truth to power, we can all be tremendously proud.â€

Liberal international co-operation critic Mark Eyking, however, described the Conservative governmentâ€™s failure to get other countries onside as a diplomatic â€œfailure.â€