<![CDATA[The Tamil Nadu Government also tends to treat us like dreaded terrorists and dangerous criminals, Peopleâ€™s Movement Against Nuclear Energy said in astatement. September 12, 2012 <div>Let us Do Some Soul-search and Talk Again! Just like a hapless wife brutally assaulted by her male chauvinistic and drunken husband, like an innocent little child beaten up by his abusive parent, our honest, hardworking, and pious people have been violated, their possessions vandalized, their 400-day long nonviolent movement vilified. By our own government! By our own Chief Minister who we brought back to power to rescue us from corruption, power abuse, nepotism, dynastic rule and double speak! An overwhelming majority of the Tamil voters including almost all the coastal communities voted for the Chief Ministerâ€™s party. 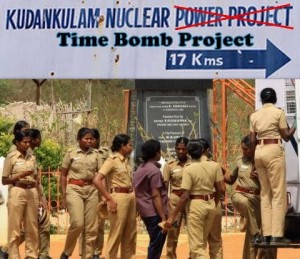 When the biggest nuclear power plants in the country or the largest nuclear power park is being set up on our seas that will have deleterious effect on our sea and seafood, land and crops, water bodies and ground water, on our livelihood and on our progeny, we have opposed peacefully, democratically and nonviolently. Donâ€™t we have at least that much freedom in our country?
In fact, the Chief Minister sympathized with our cause in the beginning. She had objected to the Chennai visit of the nuclear-armed ship, the USS Nimitz; and she had opposed the India-US nuclear deal with so much conviction. Our team met with the Chief Minister twice and the Prime Minister once at her own personal initiative. The Chief Minister kept talking about solar power and other renewable sources of energy, kept demanding more electricity from the central pool and more finance for electricity projects in Tamil Nadu. She even said that she would be one among us in our struggle.
We took to the streets, voiced our concerns to the Central Government and asked them to stop the Koodankulam nuclear power project, change our energy policy and to save our natural resources. The District Collector, Dr. R. Selvaraj, entertained us in his office and served us tea and biscuits. The Superintendent of Police, Mr. Vijayendra Bidari, gave oral â€˜go-aheadâ€™ every time we sought permission over phone for our demonstrations, agitations and public meetings. But they kept on filing false cases on us all with serious charges such as sedition, waging war on the state and so forth.
The â€˜love sceneâ€™ changed to â€˜hate sceneâ€™ in March 2012! The script changed! The situation, the lighting, and the overall direction changed! The Chief Minister alleges that we are all in a â€˜maya valaiâ€™ (mystical net). Maybe she is referring to nuclear radiation that is indeed like a â€˜maya valaiâ€™ you cannot see, hear, smell, taste or touch.
Today we are surrounded by police, beaten up by police, harassed by police, accused of committing all kinds of crimes by police, arrested by police and above all, mentally, emotionally, spiritually assaulted by police. And the Chief Minister is the police minister! We are all fisherfolks, shopkeepers, agricultural laborers, beedi-rolling women, and to be brief, working class people. We do not steal public money, we do not amass wealth through illegal business deals, and we do not plunder the nationâ€™s natural wealth. But we are treated like criminals; dangerous, seditious, violent, vicious and wicked lawbreakers. Our leaders, who have been invoking the names and wisdom of Thiruvalluvar, Buddha, Mahavir, Ashoka, Guru Nanak, Mahatma Gandhi, Khan Abdul Gaffar Khan and Mother Teresa, are treated like dreaded terrorists. Our people who worship Sage Vishwamitra, Lord Jesus Christ and Prophet Mohamed are treated with contempt and dislike. The St. Lourdes Church at Idinthakarai has been desecrated by urinating and a holy statue destroyed. Naval boats are patrolling our seas; air force planes are hovering over our villages; the police are blocking our roads; we are short of food, water and other basic essentials; and the state is waging a war on us! But we cannot do a thing!
The global nuclear mafia sees our people as their sworn enemies. The KGB, the CIA and other international intelligence agencies consider us serious threats to their respective ruling cliques. The Delhi Government is infuriated with us as they are worried about their billion dollar nuclear business deals and commissions and kickbacks. The Tamil Nadu Government also tends to treat us like dreaded terrorists and dangerous criminals.
The police have shot down an unarmed civilian Anthony John at Manappadu coastal village. Several people including a small baby are said to be missing. Some 53 nonviolent protesters, men and women, are charged with sedition and waging war on the State cases and are languishing in distant prisons in Tamil Nadu. Thousands and thousands of families are living in fear and despair.
We do not expect or want any awards or accolades for practicing democracy and protesting in a nonviolent manner. But canâ€™t we be treated with a little bit of humanness, civility and dignity? Who should we turn to? Who could we talk to? The Chief Minister may not even see this. Her arrogant upper caste advisors may say everything bad about us and our lower caste people. We would request the Chief Minister to stop fuelling the KKNPP, remove police from our area, provide compensation for the people who lost their boats, vehicles and household items, and release those who are arrested.
We thank all the leaders and members of various political parties, social movements, lawyer associations, fishermen associations, student groups, labor unions, village committees and other organizations in Tamil Nadu and other states for organizing various demonstrations and agitations in support of our struggle. We would solicit their continued support for our struggle and for the above-mentioned immediate demands as well.
The Struggle Committee
Peopleâ€™s Movement Against Nuclear Energy
]]>