<![CDATA[A cargo plane has crashed in the Congolese capital’s airport as it was trying to land in stormy weather, reportedly killing some 30 nearby residents, as well as the crew. <!--RTEditor:genereated-->The Il-76 plane, belonging to a local company Aero-services, was carrying cars and other goods from western port city of Pointe Noire to the capital Brazzaville. 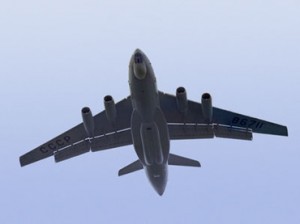 Some 30 residents have been killed as the plane skidded off the runway and crashed into houses and a bar, AFP reports citing Georgelin Massemba, head of the emergency services. The crew, thought to comprise between three and four people, are also believed to have died in the crash. Some 20 people were injured and taken to nearby hospitals, witnesses said. The rescue operation has been hampered by bad weather conditions and power shortages in the city. “At the moment, my team is having a hard time searching for survivors in order to find the victims of the crash because there is no light and also because of the rain,” Congolese Red Cross head, Albert Mberi, told AP news agency. Like many African countries, Congo has some of the worst air safety records in the world. In June, a commercial jetliner crashed in the Nigerian capital of Lagos, killing 153 people, just a few days after a cargo plane clipped a bus in neighboring Ghana, killing 10. (RT News).]]>