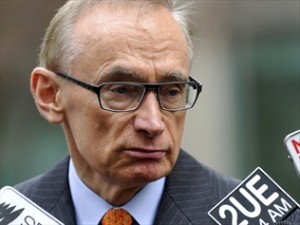 The three-day trip will be Senator Carr’s first visit to the south AsianÂ  nation as a minister and will include discussions on Australia’s aid assistanceÂ  to Sri Lanka, a spokesman for the minister told AAP on Tuesday. People smuggling will also be on the agenda. Sri Lankan authorities have in the past 12 months disrupted 69 peopleÂ  smuggling operations involving 2900 people who were intending to come toÂ  Australia, the spokesman said. Meanwhile, HMAS Larrakia intercepted a boat carrying 57 suspected asylumÂ  seekers and two crew on Monday night, north of Ashmore Islands The opposition’s immigration spokesman Scott Morrison said asylum seekerÂ  boats were continuing to arrive in record numbers “even with the onset of theÂ  monsoon season where conditions are perilous and the risk of taking boatÂ  journeys to Australia intensifies”. AAP ]]>