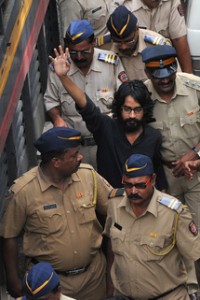 A court in Mumbai has remanded in custody a cartoonist charged with sedition and insulting India’s flag. Cartoonist Aseem Trivedi turned himself in on Saturday and was remanded in custody on Sunday for two weeks. The BBC reports he has been involved in an anti-corruption campaign led by Anna Hazare and his arrest has sparked widespread outrage. He has produced over a series of cartoons lampooning politicians. One cartoon depicts India’s national emblem with three wolves replacing the customary three lions. The message “Long live corruption” was written underneath. Another cartoon depicts the Indian parliament as a giant toilet bowl. Government officials say that while they are in favour of free speech, there is a thin line between that and insulting national symbols.]]>