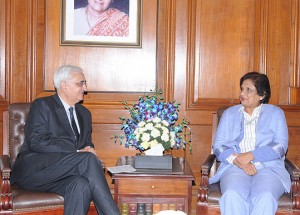 The meeting had taken place on Wednesday, a day after the Indian Foreign Minister Sri Lankan Foreign Minister G.L Peiris. The Indian External Affairs Ministry said at the meeting between Mrs. Kumaratunga and the Indian Foreign Minister both sides discussed various bilateral issues. Earlier on Tuesday Foreign Minister G. L Peiris met Khurshid and said the Sri Lanka government had given clear instructions to the Navy not to open fire and that was being scrupulously observed. New Delhi and Colombo also inked agreements, relating to combating international terrorism, drug trafficking, illegal trafficking in persons and double taxation avoidance. Earlier, Sri Lankan Navy shot dead Indian fishermen, arrested them and seized their trawlers for allegedly fishing inside the country’s maritime area, leading to tension between the two countries. In their meeting, both leaders had placed great emphasis on the safety of the fishermen and the need to ensure that violence was not resorted to under any circumstances. India also urged its southern neighbour to continue dialogue with its Tamil population representatives and hoped that for devolution of power to them. India had agreed to invest $100 million in Sri Lanka to help war refugees return home and rebuild the country’s ravaged north, as New Delhi seeks to engage in the island nation’s post-war reconstruction and retain influence. India, which once wielded undisputed leverage over the Sri Lankan conflict, maintained a largely hands-off approach because of the concerns of Tamils at home. The Indian government faced pressure to protect Sri Lankan Tamils, closely linked to about 60 million Tamils in the Indian state of Tamil Nadu. New Delhi is keen to ensure that it retains influence in the island and keeps rivals China and Pakistan at arm’s length. (Agencies)]]>