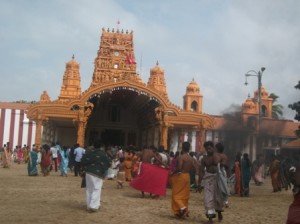 The chains worn around the necks of some Hindu devotees attending the Jaffna Nallur Temple festival were snatched by an organized gang.

According to the Jaffna sources a seven member paramilitary gang was arrested by the Jaffna police yesterday over the crime and the stolen chains were also recovered.

The suspects had snatched the chains of four women during the festival on Tuesday and escaped in a white van.

Investigations revealed that the suspects are residents of south and Chenkaladi and had commited similar crimes at religious festivals around the country.