<![CDATA[It's the end of the world â€“ unless you're in the Chinese Communist party. Over the past few weeks, Chinese authorities have detained over 93 people across seven provinces for spreading rumours that the end is nigh, laying bare the party's obsession with social stability and maintaining its tight grip on power. <a href="http://www.eelamenews.com/?attachment_id=107313" rel="attachment wp-att-107313"> 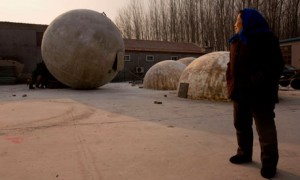 Many people in China believe in the so-called “Mayan apocalypse” â€“ slated to take place on 21 December, the last day on the Mayan long count calendar â€“ because it was the central premise of the disaster film 2012, a box office sensation in China when it was released three years ago. A man who slashed 22 schoolchildren last week in Henan province was “psychologically affected” by doomsday rumours, wrote the state newswire Xinhua. Shoppers in Sichuan province have been panic buying candles, convinced that Friday will kick off three consecutive days of darkness. Authorities in far north-western Qinghai province arrested 37 members of a group called the Church of the Almighty God for spreading doomsday rumours last Thursday, according to a provincial government website. The group, which was founded in 1992, believes that a female Jesus has been, or will be, reincarnated in mainland China. It has called for death to the “Big Red Dragon”, its term for the Communist party. Hundreds of its followers have clashed with police in three provinces over the past week. “A big eye was found in the sun on 9 December in Beijing, and female Jesus manifested herself with her name. Great tsunamis and earthquakes are about to happen around the world,” said part of a text message that the group sent to its adherents, according to the state-run Global Times newspaper. Chinese authorities call the group an “evil cult” that is guilty of embezzlement, kidnapping and torture. State media said that authorities confiscated “a large number of banners, discs, slogans, books and printing machines”, but did not go into detail. It did not mention the group’s member count, though independent estimates range from thousands to over a million. The rapid rise of subversive, quasi-religious groups in China is not without precedent. The mid-19th Taiping Rebellion, a bloody uprising against the Manchu Qing emperor, was led by a peasant claiming to be the younger brother of Jesus Christ; his army at one point controlled a swath of the country home to 30 million people. The persecuted spiritual group Falun Gong â€“ also labelled an “evil cult” by Chinese authorities â€“ operates an openly anti-Communist newspaper and television station from overseas. “There’s an incentive for politicians to strike back at these groups and their way of thinking, to reassure everyone that everything’s going to be all right,” said Joshua Rosenzweig, senior researcher at the Hong Kong-based Duihua Foundation. “The most important thing is that they are sending a message of zero tolerance and trying to keep control.” Authorities have detained a total of 34 people in the south-eastern province of Fujian for spreading rumours, six of them for selling red paper discs emblazoned with apocalypse-proof charms. Another four were accused of encouraging pedestrians to save themselves by handing over their names, phone numbers and addresses. Four were arrested in Hebei and Sichuan provinces for distributing cataclysm-themed leaflets, and another four in the south-western metropolis Chongqing for prophesying via megaphone on the city’s streets. Some Chinese people have found less subversive ways of dealing with the prophesy. Companies have made waves on social media websites by offering doomsday holidays and bonuses. One farmer in Hebei province built seven buoyant steel-and-fibreglass “survival pods” in his garage. Each costs about Â£30,000, holds 14 people, and includes oxygen, food, water and safety belts. Another pod-maker in Zhejiang province has received 21 orders for his high-quality, custom-made arks. One sold for almost Â£500,000. A farmer in the far-western Xinjiang Autonomous Region spent about Â£100,000 to build a barge-like ark with 60 tonnes of steel and 30 protective layers of fibre resin. “I invested all of my savings in the construction of this boat,” he told Chinese media. “When the time comes, everyone can take refuge in it.” (The Guardian).]]>